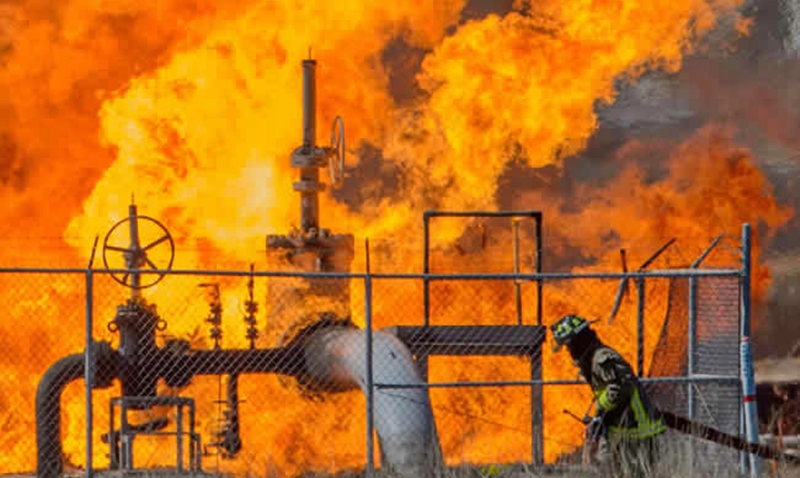 …Calls for evacuation of residents, provision of relief materials.

An environmental and human rights non governmental organization, Center for Peace and Environmental Justice, CEPEJ has drawn the attention of the Federal Government of Nigeria, NOSDRA and International oil companies, IOCs, to the pipeline fire outbreak on the Trans-Forcados Pipeline around Chanomi Creek in Yeye community in Burutu Local Government Area of Delta State.

CEPEJ’s National Coordinator, Peace Amb. Comrade Sheriff Mulade expressed the NGO’s disappointment over what he described as utter disregard for the safety of the Niger Delta environment displayed by those benefiting from the resources of the region.

He alleged that the fire incident which occurred Saturday night at about 11:45pm, when residents were already asleep, was caused by ongoing repair works at a spill site that as led to the causality of a worker and several degree of injury sustain by people.

CEPEJ’s criticism of NOSDRA was due to the Agency’s alleged neglect of the NGO’s invitation to the Director General of NOSDRA that he should visit communities and creeks in the Niger Delta Region affected by oil spill to enable him have personal knowledge of the situation.

Comrade Mulade reminded NOSDRA that several explosions of oil and gas pipelines had caused far-reaching environmental and ecological disasters. He attributed these to the substandard oil and gas transportation facilities that are often unchecked before usage, thereby leading to leakage, spills and explosions that have gone on in the region.

He said NOSDRA allegedly failed to give a correct evaluation of the volumes of crude oil and gas that have been discharged into the environment due to various explosions, leakages, equipment failures and third party interferences, as well as NOSDRA’s alleged failure to inspect pipelines that were due for remedial maintenance.

The environmentalist however called on IOCs operating in the area to provide relief materials to affected communities, urging the people to vacate the area to prevent health-related implications such as terminal diseases.

He urged the IOCs, the Federal Government and NOSDRA to save the lives of residents and their environment.