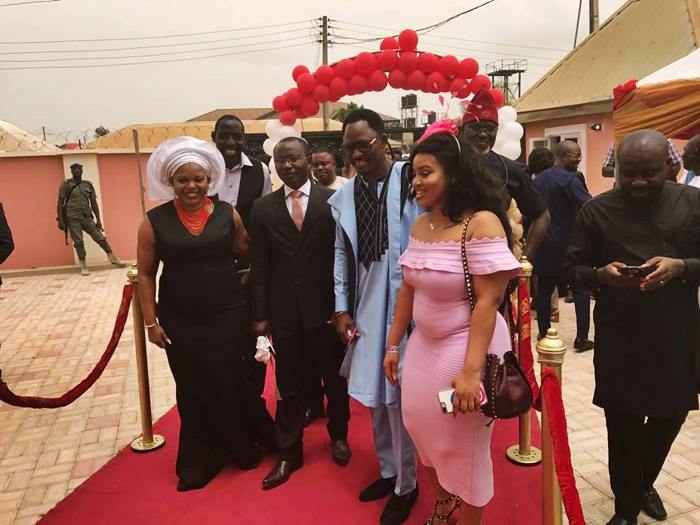 The Deputy Speaker of the Delta State House of Assembly, Rt. Hon. Friday Ossai Osanebi has again stressed the need for privileged individuals in the state to impact positively on the lives of others to grow a better society.

Rt. Hon. Osanebi who stated this while handling over the keys of a five bedroom duplex located in the core area of Asaba and a Toyota Camry Car to two of his aides for their hard work and loyalty to service, maintained that a giver never lack.

The beneficiary of the five bedroom duplex Mr. Osifihor Omamoke, is an indigene of Iyede in Isoko South and Senior Special Assistant to Osanebi, while Comrade Obinne Agbanashi from Akarai-Ekiti in Ndokwa East local government area and Media Assistant to the Deputy Speaker got the Toyota Camry Car.

Osanebi flanked by his wife, Ogechi, noted that as always he was moved to acknowledge God’s blessings in his life by using a part of it to bless others, stressing that the gifts of the duplex and the Toyota car was just the beginning as he has declared the month of April as a month of giving.

He maintained that until one develop the habit of giving, he or she can never experience the power that flows from it, declaring that he will continue to give as that was the base of the success story of his business which he said had continued to grow by the day.

Rt. Hon. Osanebi explained that loyalty pays, hence the basis for selecting Mr. Omamoke and Comrade Agbanashi for the gifts, admonishing all other of his aides to remain committed to service and celebrate others for them to be celebrated.

While returning all the glory to God for making it possible to sow in the lives of people, the Deputy Speaker paid glowing tribute to his elder sister, Pastor Nkem Osanebi and the Residence Pastors, Christ Embassy, Summit junction, Asaba, Pastor Ewaen Edun for their prayers and support.

In her remarks before presenting the keys of the duplex and car on behalf of the Osanebi family to the beneficiaries, Pastor Ewaen Edun said for the simple fact that Rt. Hon. Osanebi has watered the life of others, he will continue to swim in ocean as the grace of God will always protect him.

The two beneficiaries, Mr. Osifihor Omamoke and Comrade Obinne Agbanashi in their separate remarks said their boss took them by surprise, disclosing that when he called them in the early hours of the day to be a part of the first day of the month monthly prayer session in his house, they never knew that he had packaged such gifts for them.

They thanked Osanebi for the gifts and prayed for God’s continuous blessing in his life as well as protection and that of the entire family.

High point of the ceremony was song ministration, prayers and handing over of the duplex and the car to the glory of God.