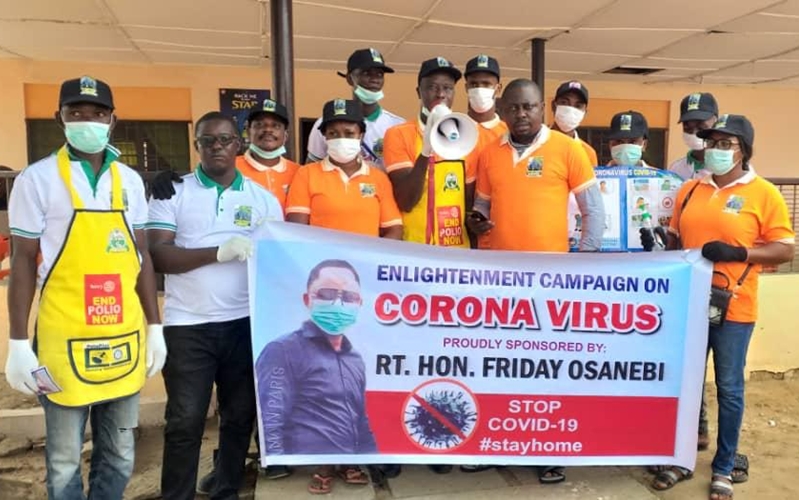 Rt Hon Osanebi at the flag-off of the exercise, said distributions of the protective materials would cover the entire Ndokwa Nation, including Ndokwa East, Ndokwa West and Ukwuani local government areas.

The Lawmaker who is the immediate past Deputy Speaker of the State House of Assembly said the process began simultaneously on Friday morning across some communities in Ndokwa Nation.

Rt Hon Osanebi, represented by Mr Sylvanus Ossai at the Kwale flag-off ceremony, said the exercise was in line with government control measures to check the spread of the virus.

The Lawmaker stated that besides distribution of the protective materials, including nose masks, hand gloves and sanitizers, awareness on the deadly effect of Covid-19 was key, hence his efforts in that regards.

He added that to adequately orient the people on the virus and symptoms would not only help protect them against it but also to reassure them that there was no need to panic over it.

Rt Hon Osanebi said the package is expected to get to the nook and crannies of Ndokwa nation.

The Lawmaker noted that the effort is to protect the people against the virus and enhance their orientation on the pandemic presently ravaging the world.

As at the time of filling in this report, the team was at some prime locations in the ever busy Kwale town, including Kwale Motor Park, from where they will proceed to other communities and villages in locality.

The President of Ndokwa National Youth Movement, Comrade Benjamin Nwogbolu commended Hon Osanebi for his effort in helping to address the challenges faced by the people following the news of the outbreak of Covid-19 in some states in Nigeria.

Comrade Nwogbolu also commended the Lawmaker for not limiting the exercise to Ndokwa East but to other communities in Ndokwa land.