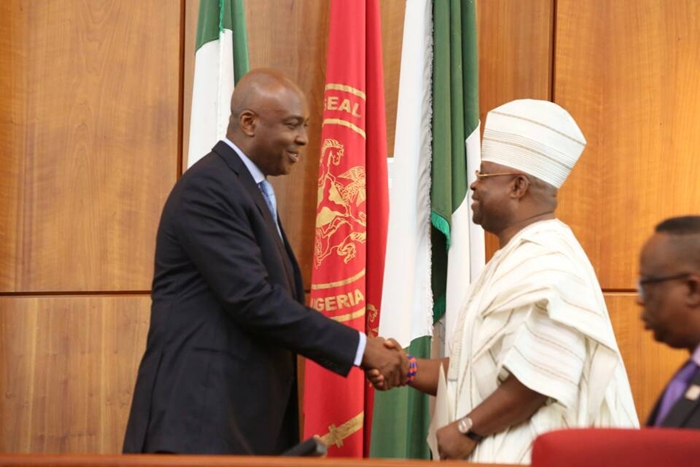 Ademola Adeleke, who was returned winner in Saturday’s Osun West bye-election, has taken his oath of office as a senator on the floor of Senate.

Senate President Bukola Saraki administered the oath on Mr. Adeleke on Wednesday, moments after Senate approved the votes and proceedings of the previous day’s business.

He received his certificate of return at the headquarters of the Independent National Electoral Commission on Monday.

Mr. Adeleke, younger brother of the late incumbent, Isiaka Adeleke, contested the Osun West senatorial bye-election, held last Saturday, on behalf of the Peoples Democratic. He defeated Mudashiru Hussein of All Progressives Congress, winning in nine of the 10 LGAs that constitute the senatorial district.

His emergence has helped the PDP number in the Senate rise to 42, with APC still standing higher at 66.

Currently there are 108 Senators in the 109-member body. One seat, Anambra Central, is vacant following the nullification of the election of Uche Ekwunife.

However, Senate President Bukola Saraki urged Ademola Adeleke, the new senator for Osun West, to return to his “natural fold’ in the All Progressives Congress.

Mr. Saraki, who swore in the new senator on Wednesday, expressed sadness that he was arriving as a PDP member.

In a press statement captioned: “Welcoming Senator Ademola Adeleke To The Red Chamber,” the Senate President expressed disappointment over the events that pushed Mr. Adeleke into the PDP.

He had opted for the opposition party after alleging a conspiracy by the Osun State leadership of the APC to deny him the party’s ticket in favour of Mudashiru Hussein, an ally of Governor Rauf Aregbesola who eventually lost the election as the candidate of the APC.

In his statement on Wednesday, Mr. Saraki said: “I was filled with emotions today as I swore in the brother of Late Senator Isiaka Adetunji Adeleke as Senator representing Osun West.

“I’m sure that my late friend, his family, good people of Ede and Osun West Senatorial district are delighted that the legacy of “Guv” can continue. I’m sure my departed colleague will, in his grave be happy and filled with joy today and always.

“My only sadness is that Senator Adeleke is not coming as an APC member. This is the result of mishandling of the pre-election matters by our party.

“I hope Senator Ademola Adeleke will very soon, return to his natural fold, the APC, where he rightly belongs.

“I hope this development will serve as an eye opener to our party at all levels that the will of the people must always be respected. We all have a good lesson to learn from this.

“Once again, I congratulate Senator Ademola Adeleke and I hope he will live up to his brother’s expectations and further uplift the legacy established by their late father, Senator Ayoola Adeleke.”

Senator Ademola Adeleke is the 3rd Senator to be produced by the Adeleke family of Ede.

His dad, late Ayoola Adeleke was the Senator that represented Oshun 2 Senatorial District of the Old Oyo State on the platform of the UPN in the 2nd Republic. There were 95 senators in all with 5 Senators from each of the 19 States then.

Demola’s brother, late Isiaka Adetunji Adeleke was the second senator from that family.

Secondly, Ademola’s landslide victory was not the first for an Adeleke. His father won the Oshun 2 seat in 1979 on a heavy landslide of 115,368 votes.