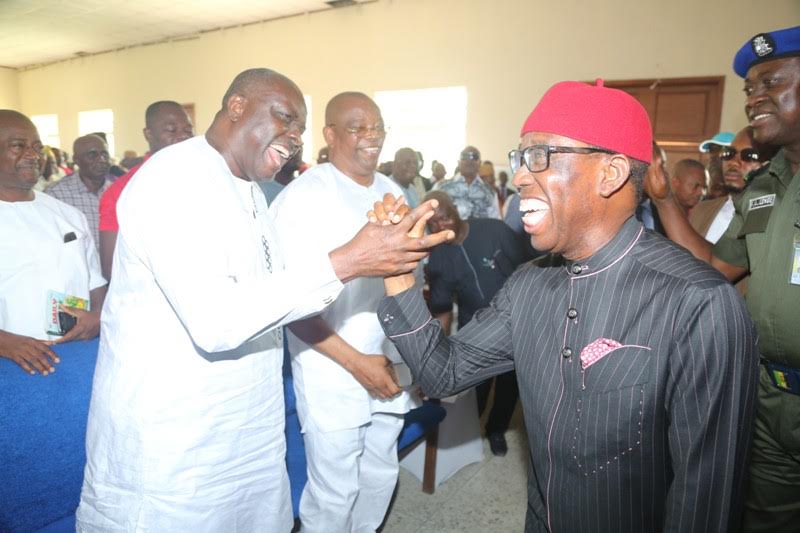 The Executive Assistant to Governor Ifeanyi Okowa on Communication, Barrister Fred Oghenesivbe, has described the former Governor of Delta State, His Excellency Chief James Ibori as thel political leader of leaders in the state, irrespective of political parties, noting that in the same token Governor Ifeanyi Okowa of Delta State is the State leader of the Peoples Democratic Party (PDP) with Barrister Kingsley Esiso as State Party Chairman.

He equally posited that for the sake of justice and equity, Governor Okowa should be supported by the good people of Delta State to complete Delta North 8 years of two terms like his predecessors in Delta Central and South, who governed the state for eight years each respectively.

Oghenesivbe who spoke to journalists during a media chat tagged “Okowa at 58” in Asaba, the state capital revealed that, the Smart Governor of Delta State is a quintessential leader and super motivational role model for new breed politicians, adding that the governor has positively impacted the lives of numerous Deltans through credible leadership and good governance.

He described Okowa and Ibori as strong political associates currently warming up to put up superlative electioneering outing come 2019. He said the duo are political twin brothers with enviable history of political and social collaboration which has yielded positive electioneering victories in the PDP state since the advent of constitutional democracy in 1999.

Reacting to speculations that Chief Ibori boycotted the recent Delta Central PDP mega rally in Sapele, Oghenesivbe who was a core member of the mega rally publicity committee said, both leaders endorsed the Delta Central Mega rally hence the monumental success of the event.

“Ibori was the first person to endorse Okowa for second term. Chief Amori was at the Sapele rally which is a clear indication that there was no political debacle before, during and after the mega rally.

“Furthermore, Chief James Ibori hosted Gov Okowa and Delta party leaders to a dinner at his Oghara Country Home immediately after the Sapele mega rally, same day before we returned to Asaba.”

He insisted that experiences and intellectual capacity garnered over the years as former Secretary and Chairman of Ika North East LGA, as multiple Commissioner, as Delta SSG, Senator and now Governor made it easy for Okowa govern the state efficiently and excellently, describing his boss as a highly detribalised governor that believes in competence of individuals and organisations,a yardstick the smart governor adopted in political appointments and award of contracts.

“Governor Ifeanyi Okowa is a grassroots politician whose wealth of experience in politics and governance helped to efficiently and prudently manage the state financial resources irrespective of the current economic woes in the country. Deltans are already politically emotional and waiting for 2019 so as to re-elect their SMART GOVERNOR for another four years of credible leadership and good governance.”

He however challenged the ruling All Progressive Congress (APC) at the federal level to fulfill campaign promises by urging ailing President Muhammadu Buhari to resign; recalling how the opposition leaders in the person of Senator Bola Tinubu, President Buhari and other opposition party leaders spearheaded several protest rally, calling on the late President Umaru Yar’adua of the PDP to resign on account of ill health.