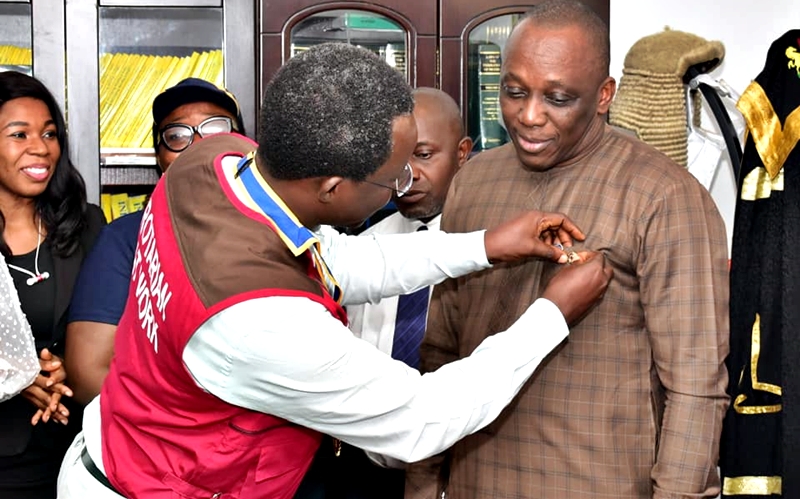 The Rotary Club of Asaba, Government House has decorated the Delta State Attorney-General and Commissioner for Justice, Mr. Peter Mrakpor with the Paul Harris Fellow Award of Rotary International a humanitarian organization in recognition of his numerous humanitarian services.

The President of Rotary Club of Asaba Government House, Dr. Felix Nwaokolo while decorating the Justice Commissioner who is also the Chairman of the Delta State Task Force on Human Trafficking, as an honorary member of the Rotary Club, said that the object of Rotary was to encourage and foster the ideal of service as a basis of worthy enterprise as well as promote high ethical standards in business and professions.

He said that the recognition of the worthiness of all useful occupations, and the dignifying of each Rotarian’s occupation as an opportunity to serve society will be vigorously pursued as one of the objectives of the Club.

The President of the Rotary Club maintained that the Organization was at the forefront of the fight against the eradication of the dreaded polio disease in Africa as well as the provision of pipe borne water to rural communities across the continent.

Dr. Nwaokolo who described the Delta Attorney-General as a perfect gentleman whose display of humility and meek of human kindness was unwavering and exemplary of a leader, hailed him for his total commitments to the service to God and that of humanity and urged him not to relent in advancing the cause of mankind.

The Attorney-General who expressed delight on his decoration as an honorary member of the Rotary Club, disclosed that the MercyGate Foundation which was his brainchild have been actively engaged in providing humanitarian services and care to nursing mothers and children through provision of diapers and sanitary towels, scholarship awards to 15 children, provision of boreholes as well as education facilities such as chairs and tables to some schools as part of his contribution in promoting education and enhance the standard of living of the people.

Mrakpor, also revealed that the MercyGate Foundation has 10 trainees currently undergoing training in fashion and design as part of its pilot scheme of free entrepreneurship skill acquisition training programme for selected applicants from across the State.

While calling on members of society to imbibe the culture of giving back to society, the Delta AG expressed his readiness to partner with the Club in serving humanity and advocated for the club to join hands with the State government in its fight against human trafficking and illegal migration.