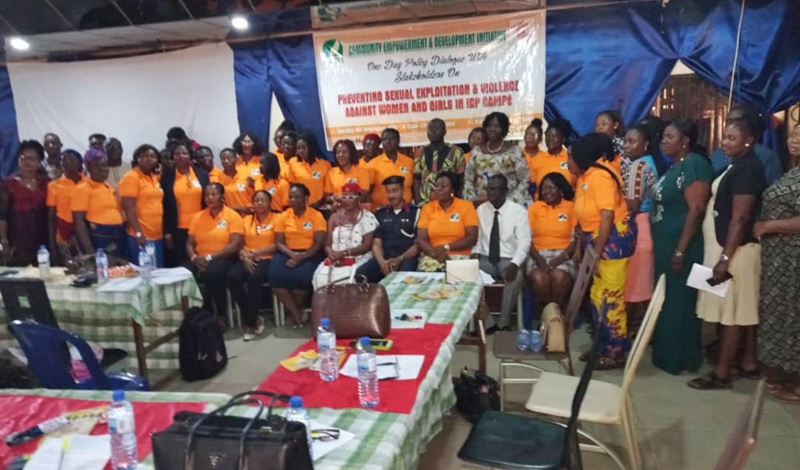 The government and the various stakeholders involved in the running and managing Internally Displayed Persons, (IDPs) camps in Delta State have been called upon to ensure that women and girls in the various camps especially the private camps are adequately protected against sexual exploitation and violence that are often reported in the camps.

This was the outcome of a one day stakeholders dialogue, organised by a Non-Governmental Organisation (NGO), Community Empowerment and Development Initiative (CEDI), in Asaba recently.

Speaking at the occasion, the Executive Director of CEDI, Mrs Martha Onose, highlighted the goal of the organisation in Restoring Hope for the vulnerable founded on Human Rights, Democracy, Peace and Development with a vision of a society that respects human-rights, uphold citizen’s welfare in line with democratic principles and peaceful co- existence that the right of the women and girl child should always be respected.

According to Mrs Onose, the Her Ease Re-Established Intervention is launched to sensitise, advocate and dialogue with relevant stakeholders for security, counselling and sexual education for women and girls in the IDP camp especially the Private camps. This can be achieved by availing the camps with reporting desk officers that are constantly in touch with the security agencies. The reporting Desk officers were selected from women and girls from Patani IDP camp and State Women Development Officers attached to the various communities

She stated that gender based violence does not include only rape, or sexual harassment, but also includes depriving victims some of his/her right.

On their part, the Ministry of Woman Affairs harped on the establishing of skills acquisition centre in the IDP camp that by so doing they won’t be having some naive thought nor be sexually harassed.

The State Emergency Management Agency, SEMA, represented by Mr Okpor Daniel, said their responsibility is disaster management for state and communities affected by any environmental disaster, and the agency had put in the best effort to ensure that inmates of such camps are protected.

The participants however, agreed that there must be adequate security in the camps, and means to prevent women and girls from been sexually exploited in the camps, especially in the privately run IDP’s.

The one day Advocacy programme witnessed participants of different women and girls who were in different IDP camps in the state during the last flood incident in the state, and stakeholders that are concerned with IDPs.