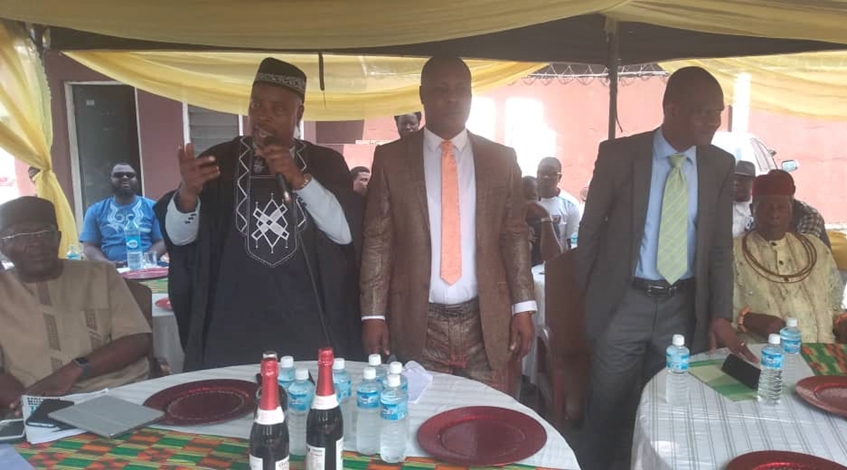 The Delta State Government has asked critics of the administration to stop distorting and misinforming the public about its activities, including policies and programs.

It said doing so to whip up negative sentiments against the government was not necessary in a state that is striving so hard to raise quality of lives and standards of infrastructure needed for all round development.

The State Commissioner, Ministry of Urban Renewal, Chief Julius Takeme who gave the admonition during the commissioning of an office complex by Egbema-Gbaramatu Central Development Foundation, EGCDF in partnership with Chevron Nigeria Plc in Warri and other projects, said the development drive of Governor Ifeanyi Okowa is all inclusive and cut across all ethnic nations.

Chief Takeme who represented Governor Okowa at the projects commissioning ceremonies was reacting to a statement made during the ceremony by Secretary of the foundation, Comrade Sheriff Mulade who re-echoed earlier allegation made by a factional leadership of Ijaw Youth Congress, IYC that of the 70 roads approved for rehabilitation by the state executive council across the state in one of its meetings, non was cited in Ijaw community.

The Commissioner while expressing concern over the statement said “I am not here to reply any allegation against the state but it is good to set the records straight. Distortion of information or misinforming the public by the activities of government is to say the least very worrisome. This is not needed in moving our state forward. Governor Ifeanyi Okowa is doing a lot to enhance quality of lives and infrastructures in the state and he is doing the work without discrimination”.

Explaining further, Takeme stated “The Delta State Executive Council had held several meetings prior to the meeting of 29 November 2018, where 70 roads were approved for rehabilitation and reconstruction. It had also met after that particular meeting and approvals were also made. So why single out one meeting amongst many others. The number two citizen of the state and many others are in the government of Dr Ifeanyi Okowa. That’s human capital development”.

“In terms of infrastructure, no Ijaw kingdom across the state that has not felt the presence of the state government. If any, it can’t be up to two. I am from Burutu, the Burutu township roads embarked upon by the Okowa’s administration has been completed so also the palace road in Gbaramatu. The 19.7 kilometer Ogulagha road project will soon be ready for commissioning. The Ayekromor bride project is ongoing. Several roads have been constructed in Bomadi town. Kpakama and Isama township roads also in Bomadi local government area have since gotten the approval of the state executive council for construction and rehabilitation. So also many others including projects executed by the Okowa’s administration in other sectors”. Takeme stressed.

The Urban Renewal Commissioner wondered why one should be attempting to use a particular meeting of the council to pitch the people against a person that has done so much for Ijaw nation, stressing that the Ijaw are too wise to show any form of ingratitude to Governor Ifeanyi Okowa.

Chief Takeme urged the Ijaw nation to remain firm in their support for the state government and appealed to communities to give peace a chance for greater growth and development. He commended Chevron Nigeria for keeping faith with the Global Memorandum of Understanding signed with the host communities and the Egbema-Gbaramatu Central Development Foundation for good utilization of funds given to it under the GMoU arrangement.

The Commissioner noted that commissioning of over nine projects within three days was worthy of commendation.

The projects commissioned which worth over 410 Million Naira include, A ten rooms Guest House at Ogbinbiri, a ten room Guest House at Akekoromo zion, a 500m access walkway at Opuama, a 150m access walkway at Opuama, all at Egbema kingdom in Warri North and a thirty room hostel block at Okerenkoko Maritime University, Rigid pavement and drains extension at Benikurukuru, a concrete landing Jetty at Oporoza and six room public toilet facilities at Kunukunuma, all in Gbaramatu Kingdom in Warri South West local government area.