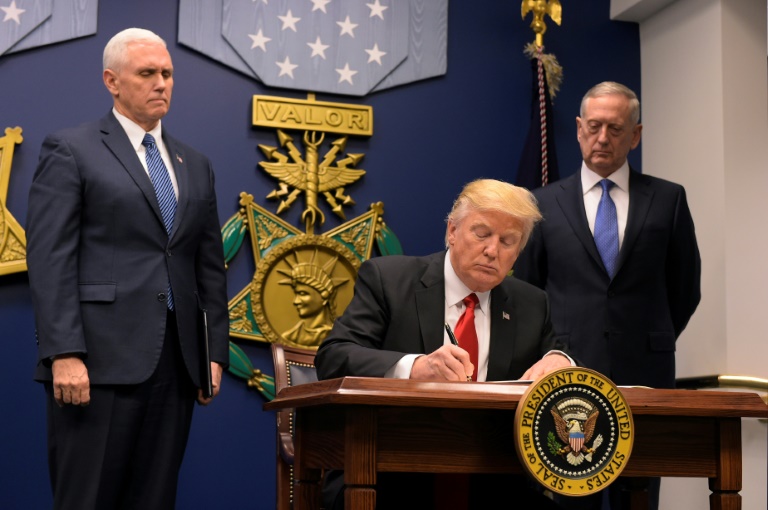 “Iran is playing with fire — they don’t appreciate how ‘kind’ President Obama was to them. Not me!” Trump tweeted Friday.

Officials said the new measures were in response to Iran’s recent ballistic missile test and its support for Huthi rebels in Yemen, who recently targeted a Saudi warship.

The sanctions do not, officials say, mark a retreat from US commitments under the Iran nuclear deal to lift measures targeting Tehran’s alleged bid to build a nuclear warhead.

But Trump has made no secret of his contempt for the accord, which his predecessor Barack Obama approved in July 2015, and officials said Friday’s new measures would not be the last.

US intelligence and Treasury officials are constantly scrutinizing Iran’s networks, looking for evidence of extremist funding and advanced weapons procurement.

The immediate trigger for the sanctions was Iran’s test, on Sunday, of a ballistic missile that US officials judge to have been capable of one day carrying a nuclear warhead.

But the latest detailed list of entities added to the list has clearly been in preparation for some time, and the White House has said “nothing is off the table” in dealing with Iran.

“We are undertaking a larger strategic review,” a senior US administration official told reporters. “The launch of the missile was the triggering event.”

Washington is also concerned about attacks by Huthi rebels, a powerful faction in Yemen’s civil war which US intelligence believes is armed and supported by Iran.

This week Huthi forces attacked a Saudi warship operating off Yemen and on Friday a US official said: “We’re very concerned about freedom of navigation in the Bab el-Mandeb area.”

The senior official said Iran was “not necessarily responsible for every tactical decision” made by Huthi forces, but that it will be made to bear responsibility for its “proxies.”

The United States has already protested about Iran’s missile test at the United Nations, arguing it was “inconsistent” with UN Security Council Resolution 2231.