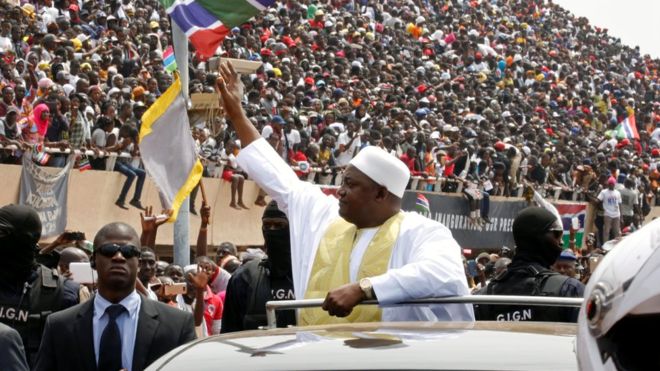 Adama Barrow has been officially sworn in as the Third President of The Gambia by Gambia’s newly appointed Chief Justice Hassan Jallow amidst thousand of jubilant and cheering crowds at the country’s main stadium.

It was the second time in exactly a month that Mr. Adama Barrow had taken the oath of office.

At a jam-packed Independence Stadium, eight miles outside the capital Banjul on Saturday, the new Gambian leader dressed in a flowing embroidered white robe topped with a hat of the same colour mounted the podium draped with Gambia’s national colours to take the oath to execute the functions of his office and defend the constitution.

A protracted political crisis caused by his predecessor’s refusal to concede defeat had prompted Barrow’s flight to Senegal where he took a provisional oath of office in the Gambian embassy in Dakar as long-term strongman refused to cede power despite losing the December 1 election.

He was accompanied at the podium by a brass band, playing a traditional song as the flags of several countries in the region fluttered high up in the stands.

The 51-year-old who won the presidency at the head of eight coalition candidates later went on a guard of honour to inspect the security forces after which a 21-gun salute sounded around the stadium as the crowds cheered.

Barrow’s oath was made to coincide with The Gambia’s 52nd independence anniversary to which several heads of state from the West African region and beyond were invited.

They include Senegalese President Macky Sall as the chief guest of honour, President Ellen Johnson Sirleaf of Liberia as the chair of the regional grouping Ecowas, Roch Marc Christian Kabore of Burkina Faso, Nana Akufo-Addo of Ghana, Alassane Ouattara of Ivory Coast and Abdella Ould Abdel Aziz of Mauritania.

The vice president of Nigeria and Sierra Leone were also among the distinguished guests which included Mohammed Ibn Chambas the UN chief representative for West Africa.