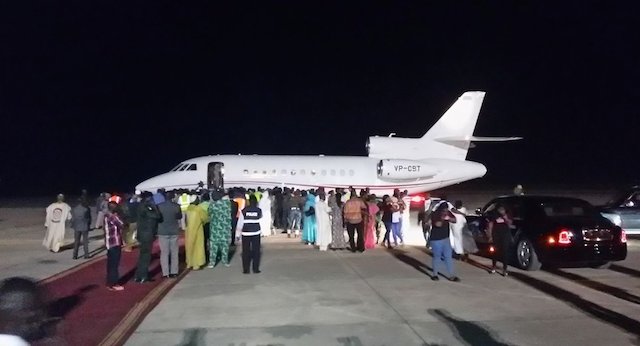 Emerging details has revealed that the jet used to transport disgraced Ex-Gambian President, Yahya Jammeh from Banjul to Malabo belongs to Tinubu.

The Nation reports that, the Falcon Jet belongs to Asiwaju Bola Ahmed Tinubu, the national leader of the All Progressives Congress.

Earlier reports had said the plane belongs to Mauritanian president.

Jammeh was flown in the dark to Malabo after two days of talks with Guinean President Alpha Conde and his Mauritanian counterpart Mohammed Ould Abdel Aziz.

”After agreeing to leave and save The Gambia from a major crisis, Jammeh was confronted by big challenge – how to fly out.

”The leaders, The Nation learnt, reached out to All Progressives Congress (APC) stalwart Asiwaju Bola Tinubu who authorised his private aircraft to be used to fly Jammeh out of Banjul, sources said.

”Tinubu’s VP-CBT Falcon Jet had been with President Conde, who is a close friend of the leading politician.

”Sources said Tinubu was contacted to allow the use of his jet to fly Jammeh out of Banjul.

”He reportedly gave a condition: it should only be used “if it will facilitate the quick exit of Jammeh and lead to the restoration of peace and democracy in The Gambia”.

“The plane eventually flew out with Jammeh, his wife, mother and President Conde on board.

“Senegal, it was learnt, insisted on knowing those on board before allowing it to overfly its airspace. This wish was granted. Jammeh was flown to Equatorial Guinea where he will be on exile”, The Nation reported.

Amid growing controversy over the assurances offered to Jammeh to guarantee his departure, More than $11m (£8.8m) is missing from The Gambia’s state coffers following the departure of long-time leader Yahya Jammeh, an adviser to President Adama Barrow has said.

Luxury cars and other items were reportedly loaded on to a Chadian cargo plane as Mr Jammeh left the country.

Mr Fatty told reporters in the Senegalese capital Dakar that The Gambia was in financial distress.

“The coffers are virtually empty,” he said. “It has been confirmed by technicians in the ministry of finance and the Central Bank of the Gambia.”

He said Mr Jammeh had made off with more than $11m in the past two weeks alone.

Mr Fatty said officials at The Gambia’s main airport had been told not to let any of Mr Jammeh’s belongings leave the country.

Reports said some of the former leader’s goods were in Guinea where Mr Jammeh had stopped on his journey into exile.

ECOWAS Soldiers Takes Over Gambia’s Army
Nic-Ola Beauty Sparkles Corner: There is Time and Season for Everyone
Advertisement