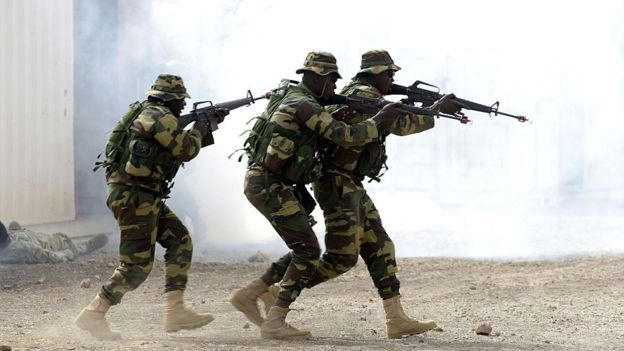 NAN – The ECOWAS Military Intervention in The Gambia (ECOMIG) have taken over some military barracks and disarming soldiers.

The troops have been reported to have seized the military barracks in the border town of Farafenni as part of strengthening security across the country.

APA quoted reliable sources Sunday that ECOMIG forces have been disarming soldiers as part of their operational mandate ordered by the regional bloc to resolve the political crisis in the country.

According to the sources the mopping up operation is being carried out mainly by Senegalese troops under ECOMIG.

They entered the town early on Sunday morning, occupied the military barracks, ordered Gambian soldiers there to lay down their arms before proceeding to dismantle its defensive fortifications.

Sources in the southern parts of the country also claimed that ECOMIG forces have also entered former President Yahya Jammeh’s home village of Kanilai to take over what’s left of its military installation which reportedly came under heavy shelling from invading Ecowas troops on Thursday.

Some Gambians have also taken to social media confirming the sighting of ECOMIG troops in other parts of the country including the coastal village of Kartong bordering Senegal’s southern region of Casamance.

Other sources spoke of similar ECOMIG troop movements in the northern town of Esau.

The movement of ECOMIG troops is necessitated to neutralize deployments by asection of the Gambian military on the orders of former President Yahya Jammeh to resist intervention by the regional grouping aimed at forcibly removing him from power after losing last month’s election to opposition rival Adama Barrow.

Jammeh flew into exile late on Saturday, ending a protracted political crisis caused by his dramatic U-turn despite initially conceding the election to Barrow.

The head of the Ecowas Commission, Marcel de Souza, said the mopping up operation will clear the way for Barrow’s eventual return to Banjul from Dakar.

Senegal where he has been taking temporary refuge since last week as the political crisis came to a head with the deployment of regional troops to oust Jammeh following the expiry of a deadline for him to step down.

According to de Souza the ECOMIG troops are also mandated to search, find and neutralize secret weapons depots Jammeh had built over the years.

“We will look for hidden weapons and mercenaries will be arrested to create a true situation of tranquillity, secure the return of populations who fear reprisals and to ensure that the country regain its national unity” he added.