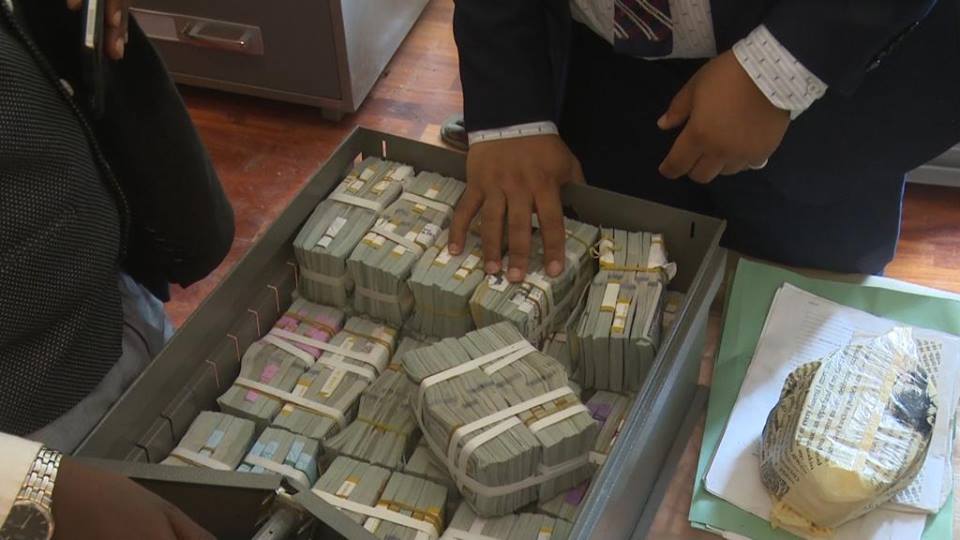 His suspension is sequel to his involvement in the humongous find of foreign currencies and Naira notes to the tune of $43.4million, £27,800 and N23.2million in a residential building on the 7th Floor of a four – bedroom apartment at Osborne Towers located at 16, Osborne Road Ikoyi, Lagos.

A three-man Committee comprising the Hon. Attorney-General of the Federation and Minister of Justice, and the National Security Adviser, headed by the Vice President, is to conduct investigations into the level of his involvement in the cash haul.

The Committee is to submit its report to the President within 14 days.

The President directed that the most senior officer in the NIA is to act during the period of investigation.

Mr Oke would remain suspended pending the outcome of the investigation, it said.

Last week, the EFCC said it carried out the raid after a tip-off that a woman, looking “haggard” and wearing “dirty clothes”, was taking bags in and out of the seventh-floor flat.

The “neatly arranged” cash was stashed in “sealed wrappers” in wardrobes and cabinets in the four-bedroom flat, the EFCC added.

The agency stated that the funds were approved by former President Goodluck Jonathan for discreet security projects during the tenure of a former Director General of the agency, Mr. Olaniyi Oladeji.

The report detailing how the money was withdrawn from the Central Bank of Nigeria, CBN, warehoused in Lagos and uncovered by the EFCC, said the sensitive nature of the projects demanded that the funds be withdrawn and kept in a secret place in the interest of national security.

The projects the funds were meant to finance were reported to have been spread across the country, while the prime project was planned to be executed in Lagos, a reason the funds were kept in the city.

The report quoted a source to have stated thus: “The spending on the projects cannot be subjected to the usual expenditure process, and that is why the funds are held in cash. If you like, you can call it illegal projects in the national interest.”

However, it was said that the projects were only known to some top government officials and the NIA.

The report, however, said the Director General of NIA prevailed on EFCC Chairman, Mr Ibrahim Magu not to carry out the operation when he learnt of it, but the latter disagreed.

Mr Oke was reported to have rushed to EFCC headquarters in Abuja to advise Magu given that the funds belonged to the Federal Government. As of when this was ongoing in Abuja, no fewer than 13 police officers, some soldiers, photographers, and videographers, were said to have forcefully gained entrance into the apartment.

Peeved by Magu’s insistence on going ahead with the operation, Oke was said to have gone to the National Security Adviser, Alhaji, Babagana Monguno, and Vice President Yemi Osinbajo to inform them about the development.

Oke’s trip to the duo was noted to have been informed by his belief that the operation was an embarrassment to the security agency.