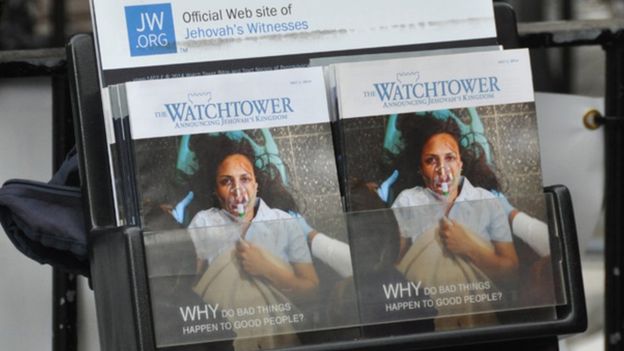 Russia has banned Jehovah’s Witnesses after the Supreme Court ruled the Christian group to be an ‘extremist organisation’.

The justice ministry argued that the group had distributed pamphlets which incited hatred against other groups.

Lawyers representing the group reject the claims and say they will appeal.

The denomination says it has 175,000 members in Russia – a country where it was persecuted during the Stalin era.

Practitioners of the faith argue that it means their activities from now on will be criminalised.

The justice ministry urged the court to close the group’s national headquarters near St Petersburg, Russian news agencies reported, in addition to banning some of its “extremist” publications.

One pamphlet distributed by the group quoted the novelist Leo Tolstoy as describing the doctrine of the Russian Orthodox Church as superstition and sorcery.

Officials have accused the religion of destroying families, propagating hatred and endangering lives.

Jehovah’s Witnesses say the accusations are completely untrue. A spokesman told the AFP news agency that he was “shocked” by the ruling.

“I didn’t expect that this could be possible in modern Russia, where the constitution guarantees freedom of religious practice,” Yaroslav Sivulsky said.

The Jehovah’s Witnesses group was founded in the United States in the 19th century.

They take most of the Bible literally and refuse blood transfusions. They are not seen by traditional Christian Churches as a mainstream denomination.

During Joseph Stalin’s reign of terror in the Soviet Union it was outlawed and thousands of members were deported to Siberia. Other Christian groups were also persecuted.

As the Soviet Union collapsed, there was a revival of Christianity in Russia and the ban on Jehovah’s Witnesses was lifted in 1991.

Gradually attitudes towards the movement hardened again and in 2004 it was accused of recruiting children and preventing believers from accepting medical assistance.

Human rights group Sova has argued that an “official repressive campaign” has been conducted against the movement for years and many of their members have been physically attacked.