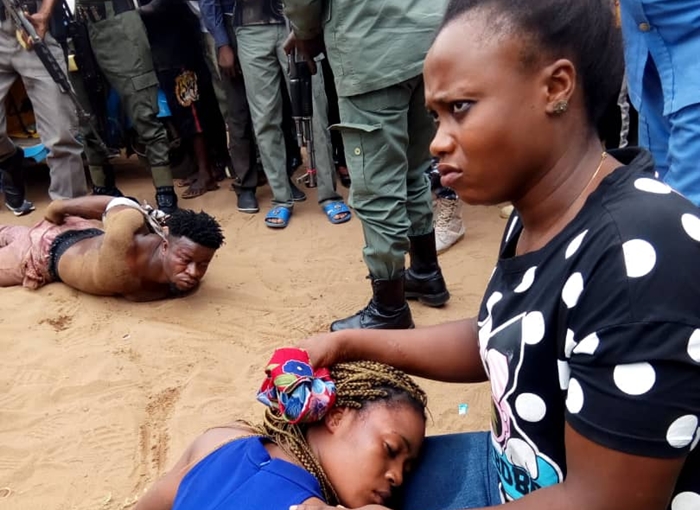 The Police in Asaba, Delta state capital, has foiled a suspected kidnap and ritual attempt on a young girl.

The girl, it was gathered was coming from the popular Ogbegonogo market Thursday, April 18, 2019 along the Nnebisi road to Summit road.

It was reliably learnt that the girl whose identity is yet unknown boarded a tricycle, popularly known as Keke Napep, on her way from the market when two other boys joined her from both sides, leaving the innocent girl in the middle.

The Suspected Ritualists apprehended by Police

The suspected ritualists referred to as yahoo boys, met their waterloo when their victim who signaled the Keke operator that she wants to drop off by Jesus Saves Junction refused to stop, forcing her to raise alarm which attracted mobile police on patrol and sympathizers to chase after them.

It was reliably gathered that the suspected yahoo boys hypnotized (charmed) their victim which made her temporarily lost memory after she raised the alarm.

An eyewitness said one of them in a bid to disappear threw a ring suspected to be magic ring in his mouth and attempted to vanish but the Police diffused the charm.

Irate youths who gathered at the scene made efforts to go on jungle justice but the police prevented them.

The Suspected Ritualists apprehended by Police

One of the boys was identified to be an owner of SUV seen within Asaba metropolis.