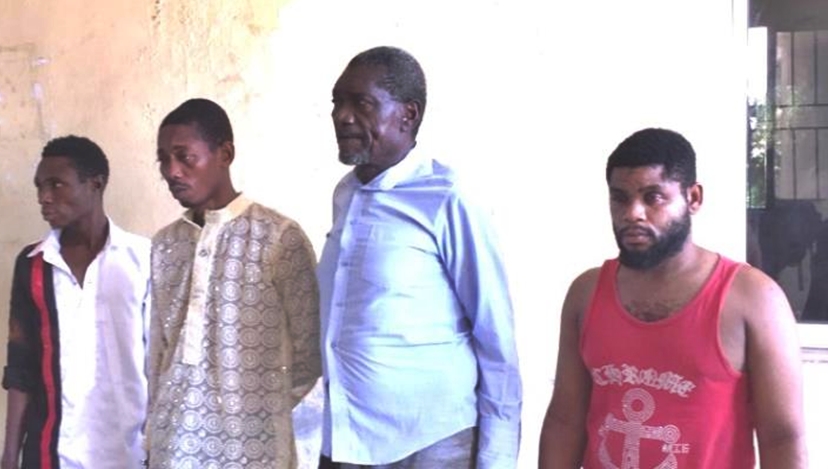 The accused persons arrested for the alleged murder of Elozino Ogege, a 300 level Mass Communication Student of the Delta State University, Abraka have been arraigned before an Asaba High Court Wednesday, April 16, 2019 where they pleaded not guilty to the 8 count charge proffered against them by the Attorney-General of the State.

The defendants, Macaulay Desmond Oghenemaro, Ojokojo Robinson Obajero, Nwosisi Benedict Uche and Enaike Onoriode who took their plea after the charges were read to them by the Court Registrar, pleaded not guilty to all the 8 count charge.

According to the statement of offence in charge No A/2c/2019, count IV of the charge reads “That you, Macaulay Desmond Oghenemaro (m), Ojokojo Robinson Obajero (m), Nwosisi Benedict Uche (m) Enaike Onoriode (m) and one Emese Emudiaga Kelvin now deceased, on or about the 15th day of November, 2018 at Abraka, within the Sapele Criminal Division murdered one Elozino Joshualia Ogege, punishable under section 319 (1) of the Criminal Code Law Cap C21, Volume 1, Laws of Delta State 2006.”

Other charges contained in the information filed against the defendants include conspiracy to commit a felony to wit: kidnapping punishable under section 516 of the Criminal Code Law, Cap C21, Volume 1, Laws of Delta State of Nigeria 2006,

The accused persons according to the charge, robbed one Elozino Joshualia Ogege (f) of her Tecno K7 Mobile phone while armed with a knife and other weapons.

S.C. Okehielem Esq who announced appearance for the 1st and 2nd defendants made an oral application for the transfer of the case to Sapele Judicial Division on the ground that the alleged offence was committed at Abraka which falls within the Sapele Judicial division and cited Ibori Vs FRN, Nigeria Weekly Law Report, 2009.

Opposing the application, Omamuzo Erebe Esq., Director of Legal Drafting, who led other Lawyers from the Ministry of Justice including the Director of Sexual Offences and Domestic Violence, Uche Akamagwuna Esq, urged the Court to dismiss the application that it was frivolous and inapplicable to the case.

He said the State acted under the provision of section 94 (2), section 99 and section 104 of the Administration of Criminal Justice Law, 2017 adding that the Attorney-General of the State through the DPP had earlier made an application to the Chief Judge of the State for assumption of jurisdiction raising security concerns not only for prosecution witnesses but as well as for the accused persons and the application was granted by the CJ and the case assigned before the trial Judge to adjudicate.

Ruling on the application for transfer of the case to Sapele Judicial Division, the trial Judge, Justice Flora Ngozi Azinge (Mrs.) dismissed the application saying that it was unmeritorious and held that the case is before a proper venue to entertain the matter.

She further ruled that the High Court of Delta State is one and that the Administration of the Criminal Justice Law which governs Criminal matters in the State empowers the Chief Judge to transfer any case from one criminal division to other.

MOTHER OF ELOZINO WEEPS PROFUSELY IN COURT
Meanwhile, the mother of Elozino who was also in court to observe proceedings refused to be consoled by the Director of Sexual Offences/Domestic Violence, Mrs Uche Akamagwuna and other sympathizers as she wept profusely in court and demanded for justice to prevail.

She said God will avenged for the blood of her innocent daughter whose life was cut down in her prime.