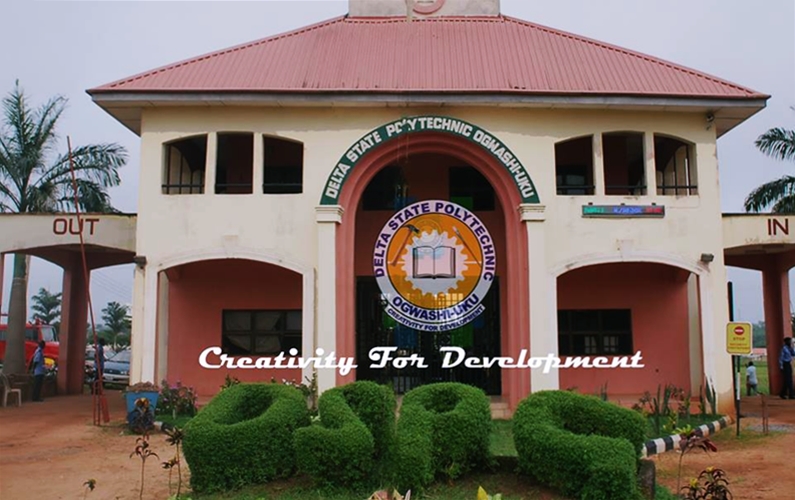 The spokesman of the command, ASP. Chuks Orisewezie, told Newsmen on Thursday, April 18, 2019 in Asaba, that the corpse of Mr Chukwuedo Iwelu was discovered in a decomposing state inside a structure at the polytechnic.

“On April 8, 2019, the family of the deceased lodged a complaint with the police that Iwelu was missing after he left home. However, four days after, the corpse of the missing man was found inside the school premises.

“The police command has since commenced investigation into the matter and we have taken statements from persons of interest in the matter.

Investigations are still ongoing so that is all I can say for now,” Orisewezie said.

According to investigations, late Iwelu, 43 years old and an indigene of Ogwashi-Uku was reportedly murdered by an unknown persons at the school premises and his body was found swollen in one of the uncompleted buildings after four days of reportedly missing by the wife.

Sources revealed that before his sudden disappearance and death, Iwelu and the management of the polytechnic had been at loggerheads over a debt of N15 million owed him by the Polytechnic.

According to sources, the deceased was found dead in a structure in the school premises which was initially used at the time of his contract for the documentation and production of school identity cards for students where he first worked as head to that department and the structure was also built by him as part of his contract and is yet to be paid for by the school. Confirming our investigation, a family associate, Mr. Austin Obi, told Newsmen that Iwelu executed some contracts for the polytechnic but that the management had failed to pay him.

“Iwelu had worked as a contractor for the polytechnic for over 10 years now, right from the tenure of former Rector, Prof. Andy Egwunyenga.

“He built some structures for the polytechnic and before Egwunyenga left, the job was not paid for.

“So, when Dr Edna Mogekwu took over as the rector, the debt was not paid, a situation that led Chukwuedo to take the polytechnic to court,” Obi said.

According to him, the matter has lingered for over five years, up till the time Mogekwu left office and the present rector, Prof. Stella Chiemeke took over.

Obi said that on the day Iwelu went missing, he had informed his wife that he was going to the polytechnic to meet with the management.

Another family source also hinted that the wife of the deceased was the first to raise the alarm over the death of her husband, disclosing that the deceased’s wife was said to have gone to the school to demand from the school authorities the whereabout of her husband who left his home in Asaba for the school the previous day, having waited in vain for his return throughout the night.

He said the wife was prevented by the gate men from gaining access into the school, to meet the Rector, Prof Stella Chiemeke, and demand for her husband.

The source said following the bad treatment meted out on her at school gate, the wife became suspicious, and therefore raised alarm that attracted passersby who assisted her to inform the Police at Ogwashi-Uku Division where some management staff were questioned before being transferred to Police Headquarters in Asaba, the state capital.

According to sources in the institution, “the deceased was called on that faithful day to come to school for the payment process but that the deceased did not meet the person that called him, however, the person who called him is a staff of the administrative department in the school and has admitted that he called him, adding that the body was first discovered by a woman who went to farm in the axis where the abandoned structure is located, on Thursday last week when they were writing jamb exam in the school.”

Another institution’s source confirmed that late Chukwuedo Iwelu arrived at the school premises for the collection of the about N15 million, being proceeds of printed identity cards and other jobs executed for the school, on Monday, and went straight to meet the Rector, Prof. Chiemeke and some top management staff for the payment.

The source stated that the meeting was held behind closed doors and they did not know what transpired but only to be told that the deceased body was lying in an uncompleted building inside the school compound, four days after.

“The Polytechnic will not be issuing any statement on the matter because the police are already investigating the case.

“The Rector has told me not to speak on the matter. We don’t want to jeorpadize police investigations,” he said.

The State Police Commissioner, Mr. Adeyinka Adeleke confirming the death said, “he was indeed found dead in the school premises, but we have invited and questioned as many as possible, some top Management staff because it is a big organization.

He said investigations are on going, even as the postmortem is being awaited to ascertain the cause of the death.