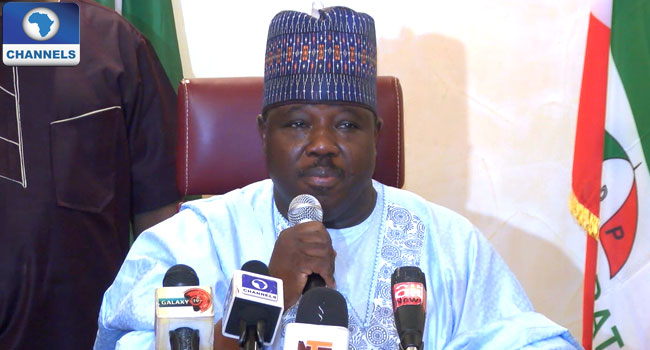 Following the February 2017, court judgment in Rivers state which reaffirmed the authenticity of Senator Ali Modu Sheriff as the National Chairman of the Peoples Democratic Party (PDP), plans to take over the party’s secretariat in Delta State is near reality.

In a disclosure made by the Sheriff-led factional state Chairman, Chief Austin Ogbagunor, he noted that the national executives through him has serve the Commissioner of Police in Delta state a letter, notifying him of the party’s decision to duly take over the secretariat.

Sources revealed that, the Department of Security Service (DSS) in the state has also been served by the same faction indicating intention of taking over.

Confirming this development, the factional chairman of the party in the state, Chief Ogbabunor, in a telephone conversation said “we are taking it over but we have not formally moved into the secretariat”, noting that the process was been legally followed to dislodge the illegal occupants.

He strongly affirmed that they would take the secretariat over before the end of the week. On whether if they have consulted the police, he said, “the IG will inform his men in the state and the Commissioner will do that, “there will be no resistance. It is only one chairman we have and that is Sheriff, every other person will quit and we are all working together.

Chief Ogbabunor expressed that he enjoys a robust relationship with Governor Ifeanyi Okowa stating that “the governor of this state is a PDP man”. He added that the word faction was eliminated immediately the court gave its verdict.

In the same development, the Sheriff-led faction Secretary in the state, Mr. Francis Onwudinjo, strengthened the Chairman’s words saying “what you heard is true”.

Meanwhile, the Police Public Relations Officer (PPRO) in the state, DSP Andrew Aniamaka when contacted said he has not been briefed of such letter.

Also, the incumbent and Markafi-led faction chairman in the state, Barr. Kingsley Esiso in a telephone response said, “I am not aware, my people are in the office right now, I am not aware”.