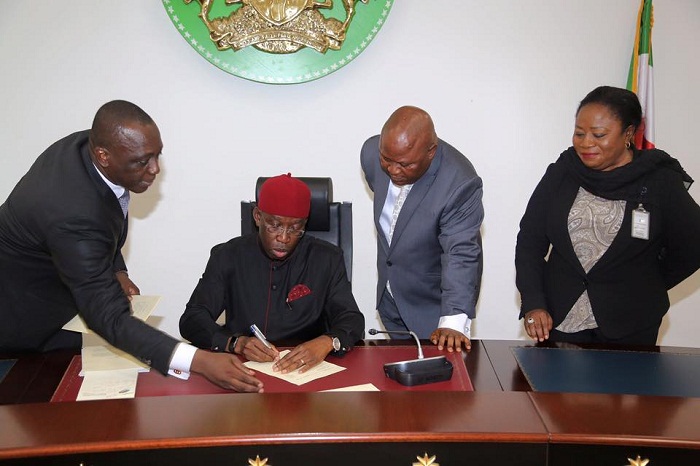 Delta State Governor, Senator Dr. Ifeanyi Okowa has assented to the 2017 Appropriation Bill of N294.5 billion with an assurance that his administration will not waver in its commitment to infrastructural development.

The Speaker of the Delta State House of Assembly, Rt. Hon. Monday Igbuya, accompanied by his Deputy, Rt. Hon. Friday Osanebi, Clerk of the House, Mrs Lyna Ochukor, and other principal officers of the DTHA presented passed the Appropriation Bill (14/03/17) at the occasion which took place in Government House Asaba and was witnessed by members of the Delta State Executive Council and other top government functionaries.

“We have a budget of approximately N294 billion in the year 2017 and it is our hope that the finances coming from various sectors will improve in the course of this year so that we are able to meet with our obligations to our people” the governor said, disclosing, “the budget is made up of N158 billion in recurrent expenditure and N136 billion in capital expenditure.”

Governor Okowa continued, “The recurrent expenditure is high because we have a heavy wage bill when it comes to the issue of payment of salary but, beyond that, the state is also spending N31 billion in the servicing of debts in the course of the year.”

He commended the Delta State House of Assembly for its cooperation with the Executive arm especially with regards to the speedy passage of Executive Bills, stating that government will intensify its drive to boost Internally Generated Revenue (IGR) to meet its infrastructural drive.

Rt. Hon. Igbuya while presenting the budget, informed the governor that the appropriation bill was presented to the House of Assembly in November, 2016 and passed through all due legislative procedures before it was passed by the House in February, 2017,

He assured Governor Okowa of the continuous cooperation of the House in making laws that will improve the lots of Deltans.