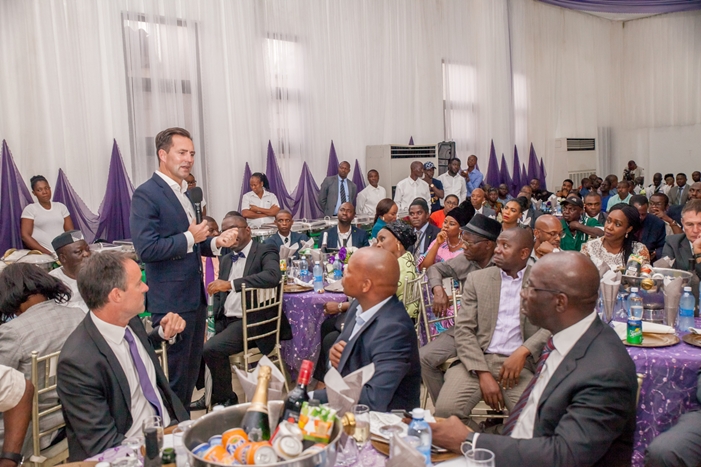 As the Edo State Governor, Mr. Godwin Obaseki, works to expand the investment inflow into the state, key players in the African Association of Automotive Manufacturers (AAAM), including Volkswagen, Jaguar Land Rover, Bosch, Toyota, Nissan, among others, have said that they are interested in working with the State Government on the development of the Benin Auto Park because of the state’s strong commitment to industrialisation and its welcoming policy frameworks.

Members of the AAAM, who disclosed this during the Edo Automotive Industry Investment Forum, in Benin City, said that the association has been keeping a tab on Nigeria, following closely the work of the National Automotive Design and Development Council (NADDC) and was excited with the proposal of the Edo State government to set up the Benin Auto Park.

They said that the close proximity of the park to the Benin Industrial Park and the Benin-Sapele Road Auto dealership corridor posed a tantalizing investment prospect, noting that the association is attracted to governments with clear-cut policy frameworks to attract and safeguard investments.

Chairman and Managing Director of Volkswagen South Africa, Mr. Thomas Scheafer, who spoke at the Forum, said that the delegation came on the mandate of their parent companies, and that they will consider making Edo the nucleus of their investment in Nigeria’s automotive industry.

According to him, “We are from the African Association of Automotive Manufacturers (AAAM). We have the mandate of our parent companies to be here. What we are trying to do in Nigeria is to reach out in a brotherly fashion and say to you, ‘come on, let’s get this done.’

“For years, we have been discussing with the government. But now we are committed to finding out ways on how to get Nigeria to where it should be and play its role on the continent.”

Noting that Nigeria has a large automotive industry that is worth exploring he noted, “Nigeria is good for at least two million cars a year. That will multiply the jobs on the continent. So where does it start? Edo State will be the nucleus for us. It will create employment at the downstream for industries involved in manufacturing.”

Emphasising that Governor Godwin Obaseki’s commitment to driving the state’s diversification was a major pull, he said, “It is good to talk with the people in Abuja and we are ready to come to invest in this country. Last week, we invested in Rwanda, one of the smallest countries on the continent. Why? Because they have great policies and because they wanted to create employment. In Rwanda, we put our money where our mouth is. We are ready to invest in Nigeria and today, we are happy with what we have seen in Edo State and the commitment of the governor.”

Director, Sales/Operations, Nissan South Africa, Jim Dando, said that the automotive industry was excited about the wave of diversification in Nigeria, particularly in the automotive sector, noting that it was pleasurable that Edo State government was taking the lead.

According to him, “We have been discussing the industrialisation of Nigeria for some time now. With the previous government, we were able to create an industrial and automotive policy. What we need to do now is to put the automotive policy in place and drive it with states like Edo.”