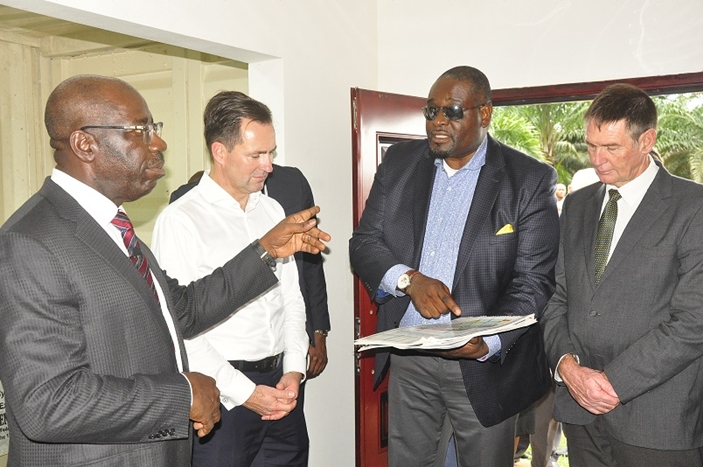 …as global brands commit to partnership with Edo govt

The Edo State Governor, Mr. Godwin Obaseki, has assured global automotive industry players, including BMW, Bosch, Toyota, Volkswagen, Ford, Uber, among others, of the state’s readiness to provide mouthwatering incentives and other business-friendly policies to enable them set up at the proposed Benin Auto Park, opposite the Benin Industrial Park (BIP).

Obaseki gave the assurance at the Edo Automotive Investment Forum, which hosted members of the Africa Association of Automotive Manufacturers (AAAM), at the Government House in Benin City, the Edo State capital.

He urged the delegation of Chief Executive Officers (CEOs) of Africa Operations of global automotive industry players to explore investment opportunities in the state, with focus on investments to boost the automotive sector in Benin City, one of the most vibrant auto sales and services hubs in the country.

Governor Obaseki said Edo State is strategically located to become one of the largest automotive hubs in West Africa and maintained that the state has a robust automotive sales and services sector, which guarantees impressive Return on Investment (RoI).

Noting that the state’s thriving automotive industry services the Niger Delta market, parts of the North and even South Western Nigeria, he said, “Benin City boasts of a stock of not less than half a million cars. We want the companies to work within and even go beyond what the national automotive council provides to explore the market.”

He said the Benin Auto Park will transform Nigeria’s automotive industry and help upgrade the used car market, such that more Nigerians would start buying new cars at affordable prices and be assured of top-of-the-range after-sales services.

Making a case for the park, he said, “We want you to work with car dealership to create the largest single market location in Benin City, where people can buy cars. We want to properly organise the auto dealers in Benin City, transform the car components sector and attract investment to the state.”

He said the investment strategy in the first instance will be to attract companies to formalise the auto sales market and thereafter the emphasis will be to assemble cars.

During a visit to auto dealers along Benin- Sapele Road, a dealer with Idris and Sons Motors, Salihu Abdulahi, told the delegation that the corridor hosts at least 100 dealers and the vehicles in their inventory stretch to thousands.

Dr. Jelani Aliyu, the Director General of the National Automotive Design and Development Council, said that the council is excited with the proposal of the Edo State Government, and sees at least two scenarios for growth.

According to him, “with this support by the state government, I see the state becoming a hotbed for automobile sales. The first instance will see the state grow from supplying used cars to brand new cars. Also, we see the influx of automobile component makers, who are also here.”

Chief Executive Officer, Volkswagen South Africa, Thomas Schaefer, said that the delegation is keenly interested in the Nigerian market, its growth and deepening investments, especially with the increased drive for the Automotive policy.

According to him, “the automotive industry is quite critical in South Africa. It generates 350,000 jobs. The market boasts of 600,000 new cars. There is zero importation. We hope to replicate this in Nigeria and are interested in the Nigerian market.

“We are interested in Nigeria and Edo State and impressed with the proposal for the Benin Auto Park. We hope to deepen the partnership,” he said.

How we Transformed Keystone Bank in less than One Year – Ohiwerei
Obaseki’s industrialistion Drive: Why we are Interested in Benin Auto Park – Volkswagen, Nissan, Others
Advertisement