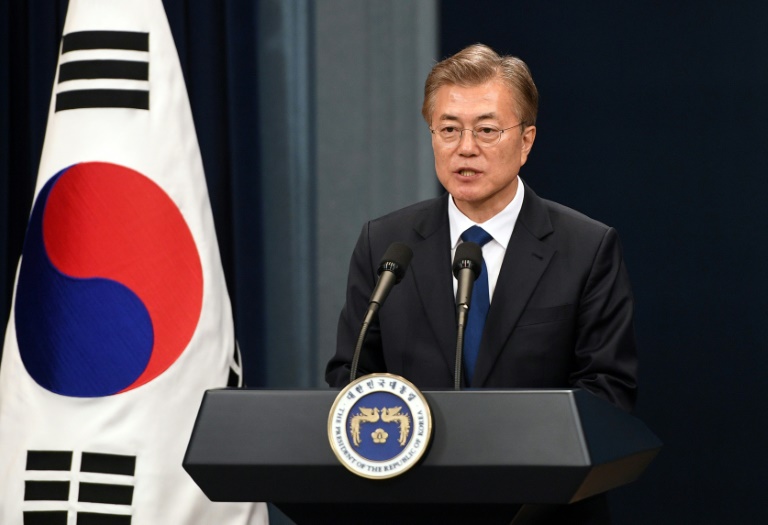 South Korea’s new president was sworn in on Wednesday, just a day after a landslide election victory, and immediately declared his willingness to visit Pyongyang amid high tensions with the nuclear-armed North.

Left-leaning Moon Jae-In, a former human rights lawyer, backs engagement with North Korea in the quest for peace — in contrast to the threatening rhetoric from the Trump administration in recent weeks.

“If needed I will fly to Washington immediately,” Moon said in an inauguration speech after taking the oath of office in front of lawmakers at Seoul’s National Assembly building.

“I will also go to Beijing and Tokyo and even Pyongyang in the right circumstances.”

Moon will have a difficult diplomatic path to tread in his approach to the North, which dreams of a missile capable of delivering a nuclear warhead to the continental United States, and has vast artillery forces trained on Seoul.

At the same time the South is embroiled in disputes with China over a US missile defence system, and former colonial occupier Japan over wartime history.

He named former journalist Lee Nak-Yon, a four-term lawmaker, as prime minister — a largely coordinating role and appointed a new head of the National Intelligence Service, Suh Hoon, who played a key role in preparing the past two inter-Korea summits of 2000 and 2007.

Domestically, Moon begins his term facing multiple challenges, including the aftermath of the huge corruption scandal that saw his conservative predecessor Park Geun-Hye impeached and swept him to power, but leaves the country bitterly divided.

Ahead of the swearing-in, Moon met leading lawmakers of Park’s Liberty Korea party — which has repeatedly accused him of being a Pyongyang sympathiser — to “beg” for their cooperation.

“I will be a president to all people,” he said in his speech, promising to “serve even those who did not support me” and remain “at eye-level with the people”.

After the low-key ceremony he was driven through the streets of the capital to the Blue House, standing in the back of his limousine and waving to supporters.

Moon took 41.1 percent of the vote in Tuesday’s election, far ahead of Hong Joon-Pyo of Park’s Liberty Korea party, on 24.0 percent, and centrist Ahn Cheol-Soo on 21.4 percent.

The 64-year-old is bespectacled, reserved and mild-mannered, although some critics describe him as bland, indecisive and uninspiring.

“I liked the no-frills inauguration event and his down-to-earth style,” said Lee Jeong-Mi, a Seoul office worker who watched him pass by. “He really looks like a true people’s president.”