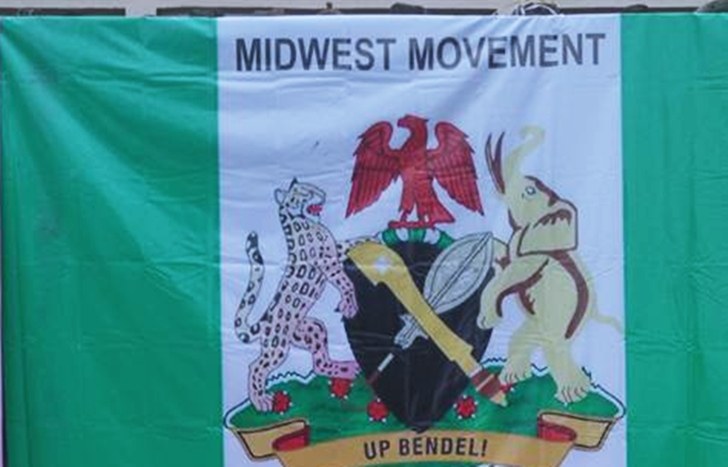 The Midwest Movement, a pan-Edo/Delta group of sons and daughters of the old Midwest Region has called on the federal government to re-federalize Nigeria and return the country to the 1963 Constitution.

The group made this position known Wednesday, August 9, 2017 through the Interim Chairman of the Interim Management Committee of the  group, Mr Don-Pedro Obaseki, while addressing a world press conference at the Bishop Kelly Pastoral Centre in Benin City as part of activities marking the 54th Anniversary of the creation of Midwest Region which was done by plebiscite in 1963.

Obaseki while decring what he described as the state of uncertainty in the country noted that Nigeria is in dire straits, stressing that it is the outcome of years of injustice, marginalization and violation of the terms of agreement of the founding fathers at the point of Nigeria Independence.

“It is now a matter beyond doubt that the federation of Nigeria is in dire straits. The current state of uncertainty is the manifest outcome of of years of injustice, marginalization, and flagrant violation of the terms agreed by the founding fathers at the point of Independence in 1960”, he said.

While declaring allegiance to the federal republic of Nigeria, the Midwest Movement deplored the jettisoning of the fiscal federal arrangement in the Independence constitution of 1960 and the Republican constitution of 1963 without the input of Midwesterners and  called for a return to the status quo ante before the military coup of January, 1966.

The  Midwest Movement also warned tribal and ethnic jingoist who are remaking maps of their groups to leave Midwest region out of their map vowing that such groups Will be stoutly resisted.

While reeling out an eight point demand from the federal government, the group called on the Nigerian government to ensure the country is not disintegrated vowing that if the country fails to hold under the weight of government’s inability to play its constitutional role, that the Midwest area will embrace international instruments and protocols to take its destiny in its own hands.

“We here by declare, in the first instance, our allegiance to the Federation of Nigeria because we honestly believe that our forefathers did not make a mistake in agreeing to be part of the federation in 1960 despite being denied a region of our own by the British Colonial Government just before Independence.

” That the Nigerian Federation as presently structured must be deconstructed, to be reconstructed through a re- federalization process using the 1963 Constitution as the acceptable template.

” That government and it’s  officials should refrain from and resist the temptation of casting all those calling for peaceful resolution of the current political impasse as ‘mere appointment seekers’ as such snide remarks are not only insensitive, but unwittingly emboden violent agitation across the country.

“That in the avoidable event that government continues to play  ostrich to the current agitations and proves unable to tackle the existential challenges posed by ethnic jingoists, the Midwest Territorial Area comprising of its twelve tribes shall resist all and any attempt to annex, attach or conscript it as part of the area of any of its near or far neighbours”, the group said.