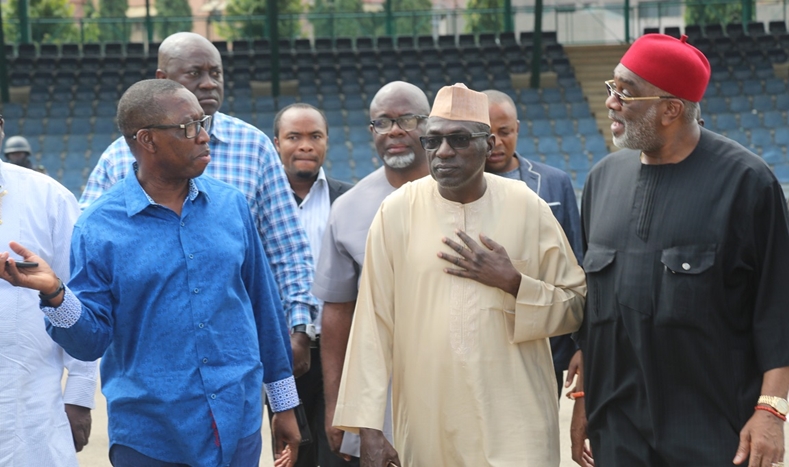 Ahead of the Peoples Democratic Party (PDP) Special Non-Elective National Convention, Chairman of the Convention Planning Committee and Delta State Governor, Senator Ifeanyi Okowa has said the party was ready to organize a successful Convention.

Governor Okowa stated this on Thursday while inspecting the Eagles Square, venue for  the Convention assuring that every necessary arrangements have been taken care of.

“We just came to see what is on ground, I believe that our people will be safe because we have everything under control, we are not expecting any hitches at all, we are doing very well as a party and as a committee, in this kind of planning you will have some challenges here and there but there are solutions being proffered for every one of it and we are confident that we are on the right track and it shall be well on Saturday”, he said.

Senator Okowa assured that high profile Nigerians will join the party within the next three weeks,  stressing “This is a new PDP and with the excitement we saw after the supreme court victory amongst Nigerians and not only PDP followers, I believe that a lot of people who thought that the party was going to implode by itself will realise that we are back alive and ready to offer what it takes to better the lives of Nigerians”,

“From the way things are going presently in this country, I believe Nigerians will realise that PDP is the only alternative that can bring Nigeria out of her present economic challenges.”, he added.

Many of our members that left earlier due to one form of disagreement or the other will return back to their party because the National Caretaker Committee has constituted a Reconciliation Committee as well as a Contact and Mobilization Committee to reach out to them.

In a related development, National Chairman of the Party, Senator Ahmed Makarfi has assured members of the party that the issues relating to the South West zone of the party have been resolved.

According to Makarfi, “In politics there are always issues but what is important is that we sit down and resolve the issues in a civil manner.

“Yesterday we had a long meeting with the leaders from the zone to resolve the issues  and no matter what you are doing as a political party you must lose some members and also gain others.

“As a party we will continue to work hard not to lose anybody, but will work much harder to bring in more members to the party” he said.