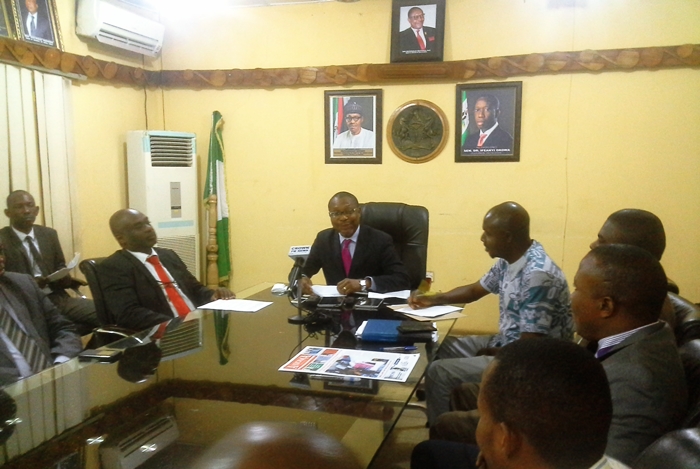 In its resolve to eradicate absenteeism in the State Civil Service and in other Agencies, the Delta State Government is set to kick off the full implementation of Clocking Exercise for Civil Servants in the state from September 2017.

The Delta State Head of Service (HOS) Mr. Reginald Bayoko disclosed this today, August 9, 2017 when he played host to members of the Indigenous Correspondents Chapel (ICC) of the Nigerian Union of Journalists (NUJ), Delta State Council, revealing that the Clocking exercise will also be done at intervals before the close of the day’s work in-order to eliminate the attitude of absenteeism in the part of workers.

In his words, “On the Bio-metric Attendance, the Clocking exercise has kicked off in the local government councils while at the state level, we are projecting that it should be in place by September this year. In an audience we had with His Excellency, Senator Dr. Ifeanyi Okowa recently, the Governor reiterated the fact that we should get this thing in place and we are working towards that.”

“The system has been designed in such a way that when it comes fully on stream, It will not just be a case of Clock in the morning and Clock out in the evening or at close of work. In between working hours, there will be several Clocking sections and it will determine those of us who come and stay in the office and those who just decide to come Clock in and leave, then come back to Clock out at the end of the day. This is what we are keeping to our Chest,” the HOS added.

Mr. Bayoko thanked members of the Chapel for bringing the development of the Clocking Exercise to the front-burner and for taking out time to assess the commission’s performance.

He further urged the Journalists to extend the support of their profession to the coverage of the activities of the State Government and the administration of Governor Ifeanyi Okowa, to show understanding that in totality, we are all partners in progress.

Earlier in his speech, Chairman of ICC, Comrade Barth Ozah commended the HOS and the entire Civil Service for their continued push for civil servants in the state to uphold the professional image, values and principles of the civil service commission noting that with the introduction of the Clocking Exercise, the state government will be able to checkmate absenteeism by recalcitrant civil servants.

Comrade Ozah however implored the HOS to revamp the training policy of Civil Servants in the state positing that training process will ensure that their work performance is maximized and develop their potentials fully.