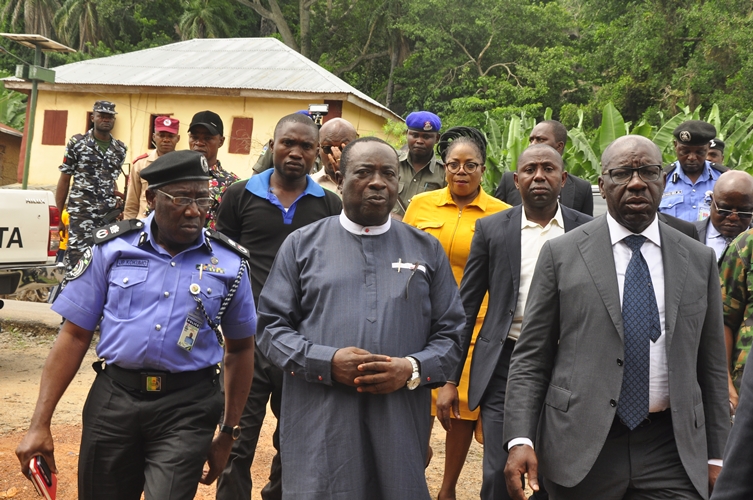 …Edo govt to train 100 youths in each LGA on security, pledges to support victims’ families

The Edo State Governor, Mr. Godwin Obaseki, on Monday visited victims of the failed Igarra bank robbery incident in Akoko Edo Local Government Area of the state, which claimed the lives of six persons, including three members of the robbery gang.

Obaseki, who was in Igarra for a condolence visit, said his administration would support the families of those who died in the robbery and take care of the burial cost.

He assured that effort was being intensified to forestall such attacks in the future as the state government would train a total of 1800 youths, 100 from each local government area of the state, to strengthen the state’s security architecture.

He disclosed that the Police was studying the footage of the Closed-Circuit Television (CCTV) cameras in the bank that was attacked, for lead to the other members of the criminal gang that escaped during the exchange of fire with the police.

Speaking during a town hall meeting in Igarra, the governor restated his administration’s readiness to protect life and property of Edo people and residents, adding, “As a government we need to critically look at the situation and ensure it will not happen again. Our primary mandate is to protect life and property. I am here with heads of the security agencies to get first-hand information and ensure such an incident doesn’t happen again.”

He disclosed that he would be visiting “the Inspector General of Police in Abuja to give us a special squad to help us eliminate these heinous crimes.”

He further said that he has held meetings with the governors of some of the neighbouring states on the need to form a border patrol team that will strengthen security in our communities.

Obaseki said the state is set to launch the security architecture which has received huge professional input, and decried the role of the police officer who arrested and detained some persons that were killed by the robbers, when they attacked the police station.

He assured that the police officer would be charged to court, as his motive was to extort money from the citizens.

Obaseki appealed to the two banks in the locality to reopen for business promising to beef up security for their operations.

The governor earlier visited a victim of the attack at Alafia Specialist Clinic and another victim, Obende Shakede, who sustained bullet wound at his residence on Momodu Ajayi Road. He was also at the bank to inspect the havoc done by the robbers.

The Chairman of Akoko-Edo Local Government Area, Hon. Don Umoro, thanked the governor for the visit, stressing that the incident happened at a time when the area was almost getting used to enduring peace after the last attack in 2015.

The community representative, Sunday Mayaki, called on the government to help fence the Police station to hinder easy access and urged the governor to help strengthen community vigilante group to assist security agencies in the area.