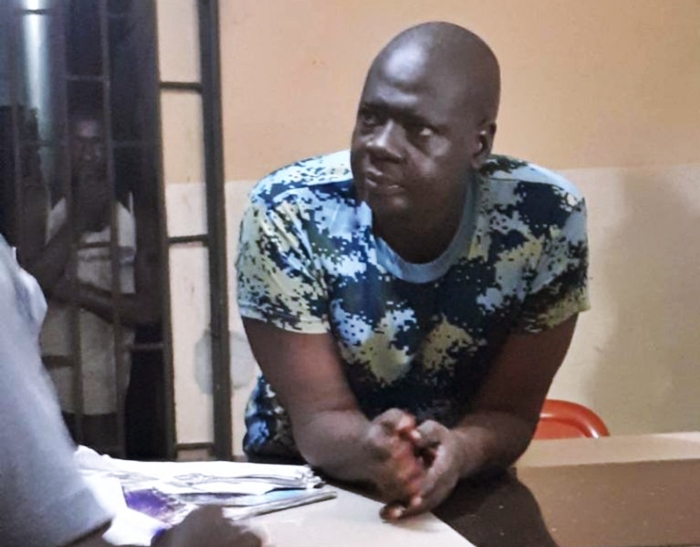 Officers and men of the Nigeria Police Force from the “A” Division in Warri on Sunday nabbed a Naval Personnel, Lance Corporal Usman Shaibu and two others for allegedly stealing transformers from Ex-freedom Fighter,High Chief Oweizide Government Ekpemupolo a.k.a Tompolo’s jetty near the Chevron Clinic in Edjeba Community in Warri South Local Government Area of Delta State.

The Naval Personnel alongside a driver of a Mercedez Benz Self-loader, Okugbe Lucky and his conductor, Chime Chukwuka were arrested at about 7pm on Sunday July 22.

It was learnt that two other Naval Personnel, Staff Sergeant P.O Ekon and Sergeant L.S Elijah who were allegedly involved in the criminal act escaped and are on the run.

Lance Corporal Usman Shaibu with two of his colleagues on guard duty at the jetty were rounded up by the Police based on information that they were stealing items from the yard to sell to unknown buyers.

The Naval Personnel with the connivance of his colleagues brought in the driver and conductor with a Mercedez Benz Self-loader with Registration Number: (Edo) XE 763 BEN to carry the transformer from the yard for sale.

They had already succeeded carrying the transformer with the self-loader and the point of their leaving the yard, Policemen rounded them up.

In the process, Staff Sergeant P.O Ekong and Sergeant L.S Elijah escaped living Lance Corporal Usman Shaibu with the two others to their fates.

It was learnt that apart from the transformers the police caught the suspects with, another transformer is also missing from the yard, with a source saying that; “The property which is located along Chevron Clinic Road, Opposite DBS in Warri metropolis has over the past months been burgled by a syndicate of naval officers who auction out the properties to criminal elements and unsuspecting members of the public”,

The Police under the watch of CSP Kelvin Zuokumor have mounted an intensive search for the fleeing Naval Personnel with a view to prosecuting them in accordance with stipulated laws.

The transformers allegedly stolen are part of the properties seized by the Federal Government two years ago.

It was gathered that as at the last count, the Suspects have sold equipment worth over N3 Billion, until they met their Waterloo in Warri, Delta State on Sunday

The former Warri South-West Council Chairman said, “They arrived at about 6:45pm. I was called by somebody at Chevron Clinic saying he saw people entering Tompolo’s yard with self-loader and that I should come and confirm if we have sold the things in the yard. I immediately called the police and they were arrested already carrying the transformer.

“The Naval Personnel, Lance Corporal was arrested with the driver and conductor of the Self-loader. The Naval pleaded that we take the matter easy with him but I insisted he should be arrested and taken to the Police Station for questioning and prosecution.”

During interrogation at the Charge Room at the Police Station, Lance Corporal Usman Shaibu confessed to have committed the crime.

Lance Corporal Usman Shaibu who disclosed the names of his fleeing colleagues said they were going to sell the stolen transformer at the rate of seven hundred thousand naira.

Contacted, the Delta State Commissioner of Police, CP Muhammad Mustafa confirmed the report saying,”the Naval Personnel is in our custody.

While noting that the matter is currently being interrogated, CP Mustafa said the Police is trying to the Military particularly the Nigerian Navy into the matter.”Yes. It’s confirmed the arrest of a Naval Personnel. But he is in our custody.

The Commander of the Nigerian Navy Ship, NNS Delta, Commodore, Ibrahim Dewu said the Navy is trying to confirm the report the report.

Commander Dewu said,”We are trying to get all the details. You have to exercise patience and let me get back to you Sir.”

In a text message, Commander Dewu said,”We cannot comment until investigation is completed.”