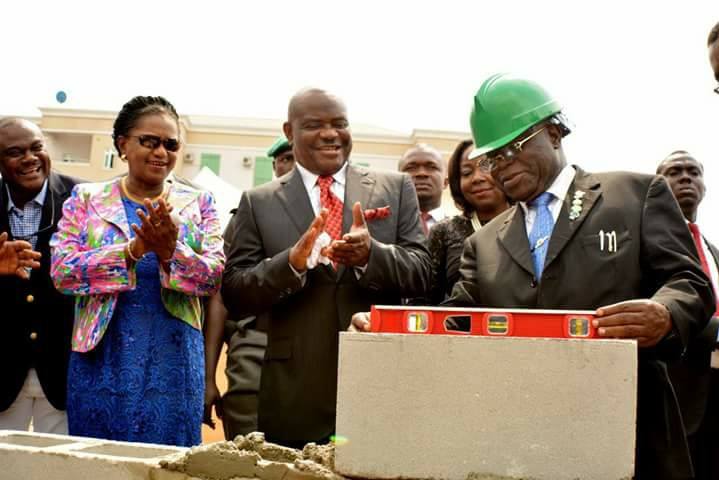 Rivers State Governor, Nyesom Ezenwo Wike has declared that the Federal Government has abdicated its responsibility of projects execution in the state because the state does not matter in its development programme.

Governor Wike stated that his administration has taken over Federal Government’s responsibilities in Rivers State, not because it has excess resources, but because it is committed to the rapid development of the state.

He spoke on Wednesday during the groundbreaking ceremony for the construction of the National Industrial Court which will be funded by the Rivers State Government.

He said: “All the facts point to the fact that Rivers State does not count in the development programmes of the Federal Government. And this has sadly been the situation for decades.

” Yet, we produced the bulk of the resources that are sustaining the entire country and funding multi-billion Naira development projects in other States of the federation.

“And so, our position is that, while we shall continue to demand for a fair treatment and commensurate recompense for our contributions to the national pool of resources, we cannot but endeavour to put our development destiny in our own hands, even if it means spending money on projects that should be initiated, funded and maintained by the Federal Government or its agencies.”

Governor Wike emphasised: “The point needs to be made that,we are taking these important steps and bearing such huge costs because of the need to create, recreate and reinforce the enabling social and economic environment for the continuous development of our State.

“It is not because we have too much money to throw around on Federal projects; it is because of our love, passion and commitment to develop our State, because we realized that the Federal Government has since abdicated its development responsibility to Rivers State.”

He explained that the Rivers State Government is embarking on the project because 90percent of the cases in the Yenagoa Division of the National Industrial Court emanate from Rivers State.

He said that the project when completed will serve the purpose of creating access to justice for litigants and also reflect the transformational legacies of Rivers State.

He noted: “The need therefore to have a functional NIC in Port Harcourt to peacefully settle labour and industrial relations disputes, enhance industrial harmony and engender economic development cannot be overstated.”

President of the National Industrial Court, Justice Babatunde Adejumo said that the Rivers State Governor has shown his colleagues the way to go by his commitment to the project.

He said when the National Industrial Court in Port Harcourt comes on stream, it will resolve the challenges and risks faced by litigants from Rivers State who are compelled to travel to Bayelsa and Imo States.

He commended the Rivers State Governor for agreeing to fund the Federal Project, pointing out that the Rivers people are the ones who bear the brunt of the absence of the National Industrial Court.

He commended the governor for service delivery, assuring that the National Industrial Court will give justice to all manner of people.

He informed that two judges have been transferred to the state to work in two courtrooms allocated by the Rivers Chief Judge.

In a goodwill message, Former NBA President, Chief Onueze Okocha said the project will advance the course of justice in the state. He regretted that the National Industrial Court was closed down by the immediate past administration in the state, leading to its relocation to Bayelsa State.

The National Industrial Court under construction by the Rivers State Government is a five storey building occupying a total floor area of 920 square metres, with four court rooms, judges’ chambers, car parks, lifts and all other facilities that fully guarantee the comfort, functionality and safety of the court and its personnel.