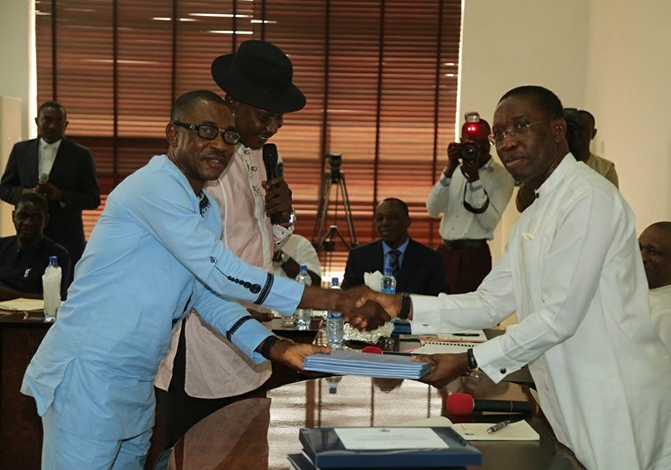 Governor Ifeanyi Okowa has received reports from the committee set up to resolve the land dispute between Aladja and Ogbe-Ijoh communities, with a plea to the people to continue to preach peaceful co-existence in the area.

According to Governor Okowa, “I have always said that in any dispute, there must be give and take for the best resolution to be achieved and I want to thank you (members of the committee) for the reports as presented, we will study them and take right decisions for a lasting solution to be proffered on the crisis.”

“Government will not shy away from taking decisions that may not be palatable if the need arise,” the governor said, emphasising, “it is our duty to preach peace, we must be careful about the type of communities we leave for our children because, any father or mother who wants to leave a crisis-ridden community is not worthy to be one.”

Today (01/03/17), Prof. Ekoko presented a majority report of the committee and Hon. Oweikpodor presented a minority report on their findings and recommendations to Governor Okowa at a brief ceremony which was witnessed by members of the state security council in Asaba.

Governor Okowa who commended the committee for a job well done, stated that the state executive council took a decision for the committee to be set up, assuring that the report would be studied and the best actions in the interest of the people would be taken.

While decrying the murder of some persons in the area as a result of the crisis, Governor Okowa, disclosed that the murder cases would continue in the courts of law and assured that the law would take its course in granting bails to arrested community leaders.