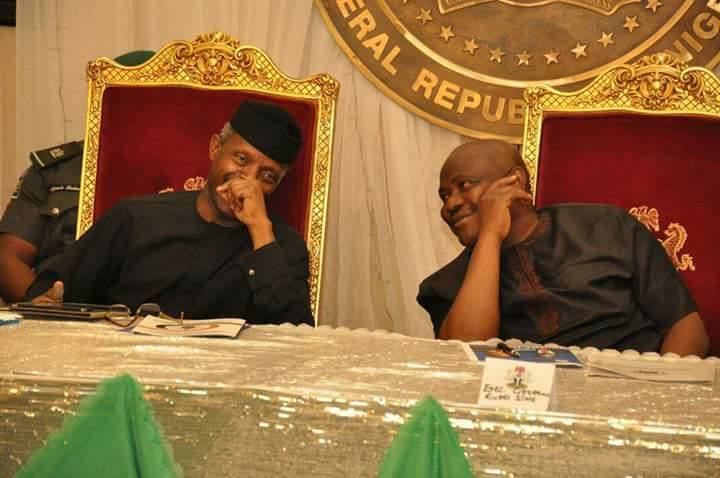 Nigeria Vice President Yemi Osinbajo has declared that Rivers State Governor, Nyesom Ezenwo Wike deserves the appellation of “Mr Projects ” because of his high profile projects across the state.

Speaking at the Government House, Port Harcourt on Monday night during the State Dinner organised in his honour, Acting President Yemi Osinbajo said he was impressed by the project sites he visited.

He said: “I think he deserves the title: ‘Mr Projects ‘. He is indeed Mr Projects. As we came in today, we had to visit some project sites”.

He noted that the visit to Rivers State was critical because of the position of the state in the country.

“Rivers State is very important to us. We take matters concerning the state seriously. We will cooperate with Rivers State to develop Nigeria.

“It is in the interest of our people and nation, that we work together for the good of our people. We need to get together to chart the pathway of growth “, the Acting President said.

In his address, Rivers State Governor, Nyesom Ezenwo Wike said that the state government will cooperate with the Federal Government to deliver development to the people.

He said the issues of development should not be politicised, because the people look up to different tiers of government for empowerment and projects.

He said: “I believe that the visit of the Acting President will bring good relationship between the Federal Government and Rivers State.

“Let us allow the interest of the majority in whatever we do. Party must take the back seat. The interest of Rivers State is paramount . That is why we are doing everything we can to cooperate with the Federal Government because we believe in the unity of this nation “

He explained that Rivers State is a state that the Federal Government needs to partner with, to consolidate the development process.