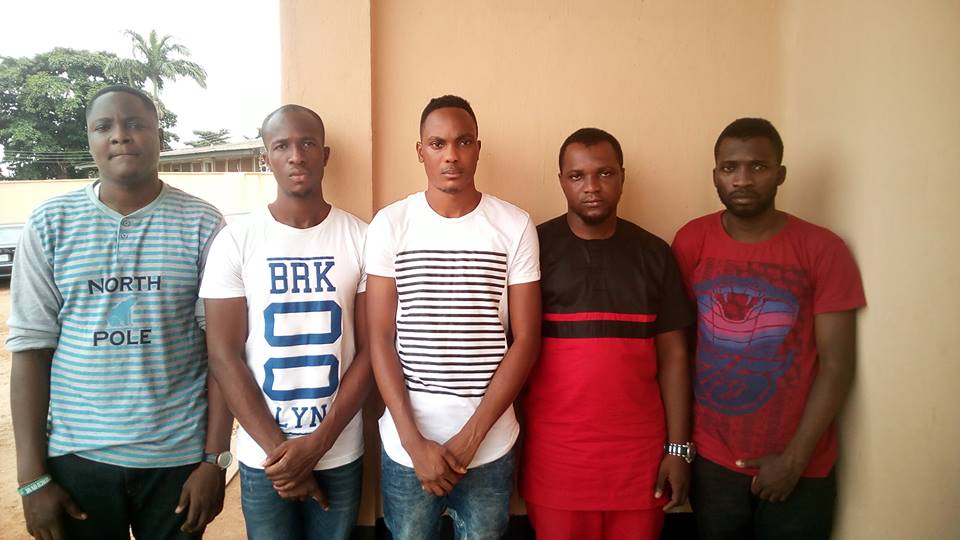 They were thereafter interrogated at the Operation Burst headquarters, Agodi where they confessed to have defrauded some American women through various romance scam using different dating sites. They also confessed to have obtained different sums from their victims.

At the point of arrest, four HP Laptops, three Nokia phones, four I phones, one Infinix Hot Note Phone, a Flash Drive and four Military camouflage T-shirts were recovered from them.

Investigations have also revealed that the suspects have various incriminating documents in their Laptops and Phones. They were posing on the dating sites as American Soldiers and using different identities to defraud unsuspecting American Ladies.

Oyewole confessed to have been posing as Billy Philip, Johnson Moron and Montegro respectively. According to him, he collected itune cards from one Stephanie and has been using the card to chat with Holly Donis, Dona Rissmiller and Mona Venziano among others who were also Americans.

Adeniran also posed as Cheryl Ann and Cindy Grant on Facebook and engaged unsuspecting ladies in dating. He had also used the medium to defraud and obtain Dollars from one Cherly Chambers.

Samuel has been posing as Gome, Rundell, and Klaus. He confessed to have collected itune card and different sums of dollars from Linda and Patricia on a dating site.

Israel had online affairs with Jeannie Mae Sherman and obtained different sums running into several thousands of dollars and itune cards from her and another One Thousand, Two Hundred and Fifty One Dollars itune cards from Lritz Ortiz. While Olorunyemi using the names Terry Elizabeth and Bunt Janice Muriel had also swindled unsuspecting victims to the tune of Two Hundred Dollars and Three Hundred Dollars itune cards.

The suspects will be charged to court as soon as investigation is completed.