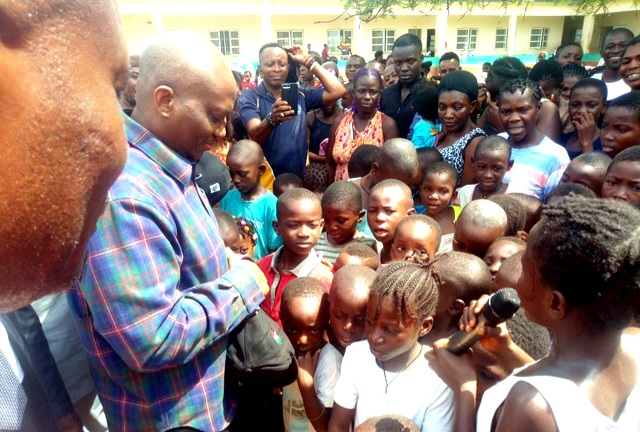 The Minority Leader of the House of Representatives, Rt Hon Ndudi Elumelu has visited flood victims at the Six Internally Displaced Persons, IDP, camps in his Aniocha/Oshimili Federal Constituency, Delta State, with a call on the Federal Government of Nigeria to dredge the rivers as long term solution.

Elumelu was at the various camps on Friday November 4, 2022 accompanied by notable leaders of the Federal Constituency to sympathize, empathise and give succour to the victims.

At each of camps, Elumelu who represents Aniocha/Oshimili Federal Constituency in the House of Representatives, expressed his empathy, that of the Presidential Candidate of his Party, PDP, Alhaji Atiku Abubakar, the Vice Presidential Candidate and Governor of Delta State, Senator (Dr) Ifeanyi Okowa and the PDP Governorship Candidate in the State, Rt. Hon. Sheriff Oborevwori, for the people and the victims to see the situation they have found themselves as not permanent, but temporary.

He prayed and glorified the Lord God Almighty with them and donated the total sum of N25 Million cash for their feeding, even as he revealed that arrangements have already been made for the provisions of relief materials for the flood victims, to enable them go back to their various communities when finally the flood recedes.

Speaking with Journalists after the visits, the Minority Leader said that his party, the PDP, had always been known to empathise with the plight of the people, saying that the people will continue to be the centre point of all of their activities.

“My Governor, His Excellency, Senator (Dr) Ifeanyi Okowa has demonstrated it several times and he has continued to do so. And we will continue to follow the suit.

“I felt that as the child of the Governor, I should come and demonstrate that for our people, who as a result of the natural disaster were displaced, talk to them and let them know that whatever is happening in their lives today is not permanent, but temporary.”

The Federal Lawmaker used the opportunity to call on the Federal Government of Nigeria not to leave the plight of the people to the state Government alone to address, saying that they should come to the aide of the people because the victims are suffering as a result of the natural disaster.

“I am also calling on NEMA, as a matter of urgency, to attend to our resolution in the House of Representatives to send relief materials to our people. With that, it is a short term measure. That, does not mean it will solve the entire problem, but, it is a short term measure, at least to put smiles on their faces while Federal Government look for a long term measure to address the flooding issue all over the country, most especially my Federal Constituency, Aniocha/Oshimili Federal Constituency, Delta State,” Elumelu stated.

He advocated for the dredging of the River Niger and its tributaries, noting that it remains the long term solution to the problem of the perennial flooding in Nigeria.

“These are long term measures that should be done to alleviate the suffering of our people and by the time we enter the next rainy season, our people will not have to face this kind of situation,” the Minority Leader said.

It was indeed an atmosphere of joy unspeakable at each of the camps as the victims expressed uncommon excitement towards the kind actions of the Rt. Hon. Ndudi Elumelu while appreciating him through heartfelt prayers.