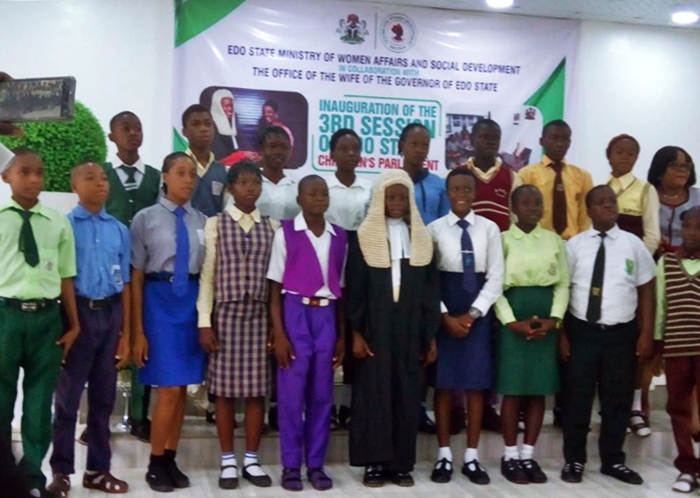 Speaker, Edo State Children’s Parliament, Master Richard Asen (5th right), with other Principal members and other members of the Parliament during their inauguration at the Government House in Benin City.

The Edo State Government has inaugurated the 3rd Assembly of the state Children’s Parliament with a representative from each of the 18 Local Government Areas of the state.

The inauguration was conducted by the state’s Ministry of Women Affairs and Social Development, and Office of the Wife of the Governor, at the Government House in Benin City, Edo State.

Wife of the Governor, Mrs. Betsy Obaseki, urged the parliamentarians to perfect the act of parliamentary engagement as legislature remains the bedrock of democracy.

Represented by Senior Special Assistant on Administration in the Office of the Wife of the Governor, Mrs. Chattie Anakhu, Mrs. Obaseki, noted, “As you carry out your assignment, bear in mind that you are one of the fortunate children in the state and let this fill your hearts with humility and inspire you to conduct yourself with dignity throughout your tenure.”

She said the parliamentarians should learn from their predecessors, adding that a fully furnished office in her office had been provided to enable them carry out their legislative engagements.

The highlight of the event was the presentation of the new members of the Children’s Parliament to members of the Edo State Executive Council led by Governor Godwin Obaseki.

Speaker of the Parliament expressed appreciation to the governor for giving him and members of the Parliament the privilege to pilot the affairs of children in the state, noting that they would ensure that the rights of every Edo Child are protected.