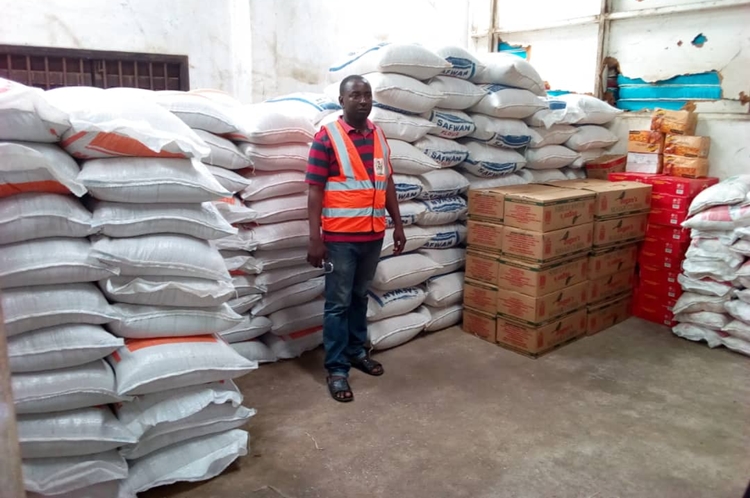 Relief materials being distributed to flood victims by officials of the Edo State Emergency Management Agency in Benin City.

To mitigate the impact of flooding resulting from incessant rains and the overflow of the River Niger, the Edo State Government has intensified the distribution of relief materials to victims in affected local government areas across the state.

Speaking to journalists during the distribution of relief materials in Benin City, Special Adviser to the Governor on Special Duties, Mr. Yakubu Gowon, said the materials will cushion the effect of flooding in the affected communities across the state. The materials, according to him, include mattresses, deep freezers, drugs and food items, including rice, milk, beverages, salt, groundnut oil, detergents, among others.

Gowon said, “One trailer-load of mattress is going to Ubiaja in Esan South-East and another to Ekperi in Etsako Central Local Government as well as other areas in the state, to assist the affected communities.”

“The deep freezers are to store the food items to ensure that they do not go bad. We are mobilising more relief materials to the communities to provide the people with food and shelter, until the floods recede before that they go back to their homes and communities.”

In the past few weeks, persistent rainfall has dislodged some persons from their homes, and the state government has opened resettlement camps for residents that were adversely affected by the heavy downpours.

Meanwhile, as part of the response plan to the flooding occasioned from incessant rains, the state government has partnered with the Economic Community of West Africa States (ECOWAS) Early Warning Mechanism for Nigeria (EWMN) to strengthen the emergency management teams in local councils to mitigate effects of the floods.

Mr. Gowon disclosed this during a road walk organised with ECOWAS-EWMN to raise awareness on the dangers of indiscriminate waste disposal and other unsafe environmental practices that lead to flooding and other environmental disasters.

Mr. Gowon said his office will work with the ECOWAS team to fast track response and emergency services to local government, noting that the council chairmen will be supported with relief materials to minimize the effect of the floods. He noted that the response plan includes preemptive measures that will see the councils developing a workable template to forestall the devastating impact of the floods in future.

Head of ECOWAS-EWMN, Dr. Femi Oke-Osanyintolu, said the resolution reached at the end of the two-day workshop is for emergency management teams to be well-coordinated and that stakeholders must work together to tackle the challenges of flooding in the state.

“Each local government area must have a contingency plan in place while the state government will develop a state contingency plan. They will meet quarterly for review. We also agreed that emergency management is everyone’s business, as such all should work together as a team in tackling the challenges of flooding in the state.”