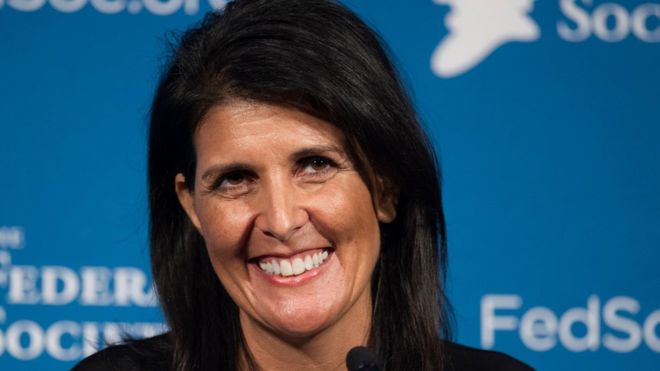 Donald Trump has named the daughter of Indian immigrant, South Carolina Governor Nikki Haley as US ambassador to the UN, praising his former critic as “a proven deal maker”.

According to BBC, She is the first non-white female cabinet-level official appointed to the incoming Trump administration.

Mrs Haley is the daughter of Indian immigrants and was a vocal critic of Mr Trump on the campaign trail.

A rising star in the Republican party, the 44-year-old is the youngest governor in the US.

Mr Trump said in a press release: “Governor Haley has a proven track record of bringing people together regardless of background or party affiliation to move critical policies forward for the betterment of her state and our country.

“She is also a proven dealmaker, and we look to be making plenty of deals. She will be a great leader representing us on the world stage.”

The Republican-controlled Senate will need to confirm her appointment before she officially takes office.

In a statement, Mrs Haley said she was “moved” to accept the assignment and would remain the South Carolina governor, pending her congressional confirmation.

She had endorsed Florida Senator Marco Rubio during the Republican primaries, later throwing her support behind Senator Ted Cruz – Mr Trump’s final rival before he became the party’s nominee.

Although Mrs Haley eventually voted for Mr Trump, the governor said she was “not a fan” of either him or the Democratic candidate, Hillary Clinton.

What does the job involve?

The job of the “permanent representative” to the UN is to represent US interests. As a member of the cabinet the ambassador must inform the president of UN activities and make recommendations for state actions.

The envoy has the responsibility of a role on the UN Security Council, with a permanent veto power.