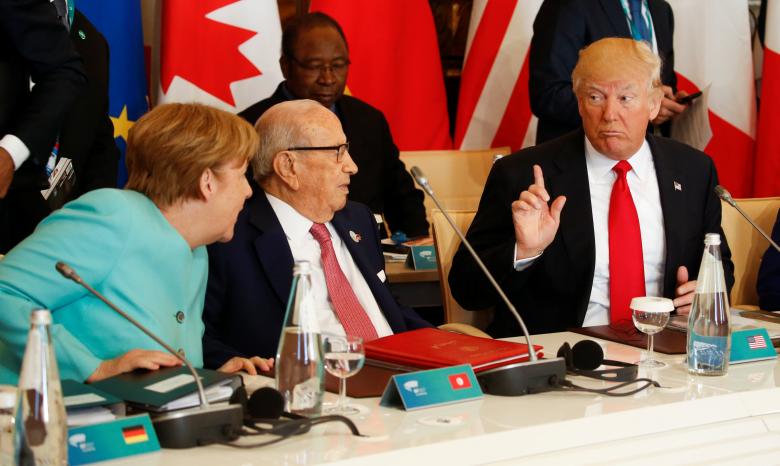 G7 nations on Saturday were deadlocked over climate change as US President Donald Trump rebuffed pressure to toe the collective line in the club of powerful democracies.

Delegates from the Group of Seven leading economies (US, Britain, Canada, France, Germany, Italy and Japan) said a closing summit statement to be issued later Saturday would acknowledge only that six members were committing to upholding the Paris climate accord on curbing emissions, while the United States continues to reflect on the matter.

G7 leaders began the concluding day of their annual summit in discussions with leaders from Ethiopia, Kenya, Niger, Nigeria and Tunisia.

The five African states are key players in the Mediterranean migration crisis, as countries of origin or transit for hundreds of thousands of migrants attempting to reach Europe via perilous crossings of the Mediterranean.

According to Reuters, Niger President Mahamadou Issoufou urged the G7 to take urgent measures to end the crisis in Libya — the point of departure for hundreds of thousands of migrants looking for a better life in Europe. He also criticized them for not honoring aid promises to fight poverty in West Africa’s poorest regions.

“Be it Niger, a transit nation, or the countries of origin, it is only through development that we will prevent illegal migration,” Issoufou said.

The G7’s Italian presidency placed this year’s summit in Sicily, in a luxury hotel overlooking the Mediterranean sea, hosts Italy had hoped that the summit would focus on Europe’s migration crisis and the problems of neighboring Africa.

But even that has prompted discord among participants as Trump, according to Italian sources and activists, resists the hosts’ desire to issue a declaration underlining the benefits as well as pitfalls of migration.

That sort of language is anathema to a White House that wants to impose a ban on travellers from six Muslim-majority countries.

The internal G7 divisions and a suicide bombing in Britain on Monday, that killed 22, overshadowed the Italian agenda.

At last year’s summit in Japan, leaders issued a lengthy communique in support of resisting protectionism, as well as helping refugees and fighting climate change.

But that was then, when Barack Obama still occupied the White House. Today, his successor is defiant about stepping out of the G7 line.