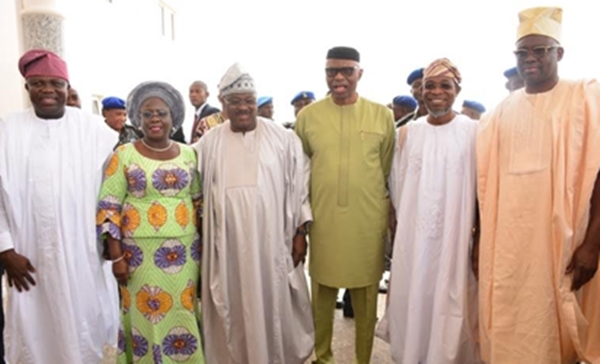 Southwest Governors on Monday resolved to work together to address the security challenges confronting the region and foster economic growth and well-being of the people.

The Governors, in a communiqué issued at the end of the meeting of Southwest Governors’ Forum held at the Government House in Ado Ekiti, Ekiti State, also agreed to adopt a uniform educational curriculum to boost educational system in the region.

Fayose, who read the communiqué to journalists, said the Governors resolved that all Commissioners of Police and intelligence institutions in the region will henceforth meet regularly to compare notes and work together to manage in a concerted way the aerial, land and waterway security architecture of the region with State Governments supporting with the critical resources.

He said the Governors also approved the report of the workshop on security, law and order in the Southwest hosted by Lagos State.

According to him, the Governors also approved the constitution of a Regional Technical Working Group on integrated infrastructural development with regards to multi-modal transportation system such as highways, rail, water and air, as well as integration on energy and power, digital and telecoms and leisure and entertainment.

He added that the Governors further agreed that Odua Investment Group should serve as a special purpose vehicle to drive the regional economic integration mission, while the Development Agenda for Western Nigeria (DAWN) Commission would be supported to achieve the objectives of its establishment.

He added: “It was agreed that a Committee should be set up on Federal Government allocations in agriculture to be accessed for regional benefit. “An expanded Committee to be set up to make consultations, give consideration and set objectives on the regional direction with regards to the Federal budget on its implementation especially on agriculture with emphasis on irrigation and storage.”

Earlier in his opening remarks, Fayose urged his colleagues in the region to rise above partisan politics and work for the unity and economic growth of the region.

He said it was time for leaders of the region to take affirmative action and speak with one voice on issues affecting the Yoruba nation.