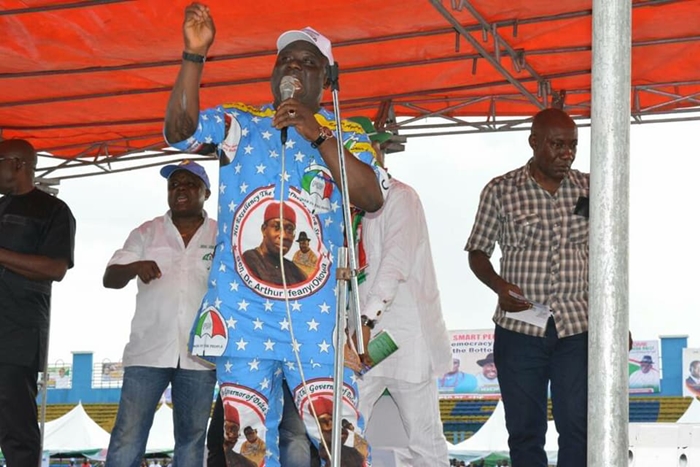 The Speaker, Delta State House of Assembly, Rt. Hon. (Chief) Sheriff F.O. Oborevwori (JP), has called for unity among members of the People’s Democratic Party (PDP) in the State.

Specifically, the Speaker, at the Delta State PDP Mega Rally held at the Sapele Township Stadium, Friday, urged party faithful and supporters from Delta South Senatorial District to maintain their support for Governor Okowa, saying the Governor has performed beyond expectations in the last two years in office.

In his remarks at the well attended Mega Rally despite the heavy downpours, the Speaker said that the existing unity in Delta State PDP must be sustained for the interest of growth and development of the State.

“The Governor has done so much for the people of the District and the State generally   in the last two years. We are appreciative of the gesture of His Excellency. We are using this Delta State PDP Mega Rally to reaffirm our unalloyed support to the Governor and to let him know that he can count on the people of Delta Central Senatorial District in his re-election in 2019”, the Speaker said.

According to him also; “The Governor has done very well, he has been very prudent in the management of funds coming to the State and has been transparent in the even spread of projects across the State. We will deliver the Governor again in 2019”.

“When music is nice, you play it twice and therefore, let us continue to give our maximum support to our visionary Governor who is on a mission to move Delta State to the next level. My people, when we come together under one umbrella as one united family, we can do it better and shine at the end of the day and so let us remain united as there is beauty in unity,” the Speaker stated.

Rt. Hon. Oborevwori also said that; Your Excellency, our people have been out in the rain since morning dancing, singing and waiting for you, they love what you are doing and they are not going to be deceived by the opposition. Delta State has always been a PDP state and will continue to be so”.

“My people, let us be united and let us do it again for our Governor blessed with wealth of experience. Let us do it more than we did in 2015 and I thank you all for defying the heavy downpours today to demonstrate your love for our Governor”, he said.

Back to Barrack: Police to withdraw Mobile Personnel from VIPs
Qatar says list of demands not Reasonable