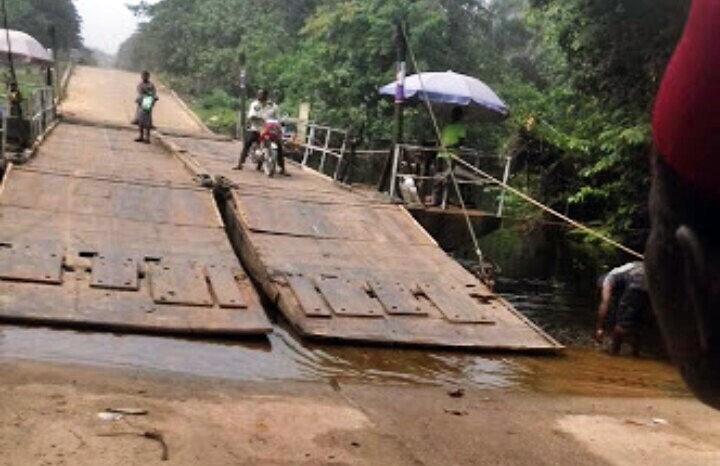 The President-General of the Aballa-Uno Youth Council, Comrade Micheal Dialor made the appeal on behalf Of the community.

He described the deplorable condition of the abandoned road project as a death trap to the people of the area.

“The company mobilized to site, cleared the earth surface and tarred only 200 hundred meters of the road, before abandoning the project.

“Again in 2011, the Niger Delta Development Commission (NDDC) re-awarded the same road project at a cost of N3,997,940,111.46 to Interbau Construction Limited and yet again, the project was abandoned.

The youth leader said the road project, which included a bridge across the Iyase River at Atu Okpai community has remain a source of great concern to the communities due to its hazardous condition.

“Many a time, our women die during child-bearing from complications due to no access road to convene the pregnant women to urban towns for proper medication,” Dialor said.

Dialor, who is also the Palace Secretary to the Aballa-Uno Regent Monarch, the Okpala-Ukwu, said the condition of the road has left a devastating effect on the social and economic life of the people of the communities.

He said that farmers in Aballa-Uno and other neigbouring villages loose thousands of naira on regular basis due to lack of transportation to convey their farm produce to the major towns, a situation that has resulted in wastages.

The youth president further explained that the bad condition of the road have forced the few transporters plying the route to abandon the area.

He also recalled that the Aballa-Uno Development Union had sent a petition dated March 8, 2016 to the NDDC, in which they highlighted the deplorable condition of the road and appealed for intervention.

According to Dialor, the people of Aballa-Uno and neigbouring communities have been cut off from other parts of the state due to bad condition of the road which had been compounded by galloping erosion.

The palace secretary appealed to the NDDC for urgent attention to continue work on the road  project in order to give the grassroots people of the four communities linked by the road project a sense of belonging.

“On behalf of the good people of Aballa-Uno, I am using this medium to draw the attention of the federal government to the plight of the people of the surrounding communities over the road project.

“The Aballa-Uno community is also appealing to the NDDC to please as a matter of urgency, mobilize Interbau Nigeria Limited to enable the company resume work on the road project,” Dialor said.