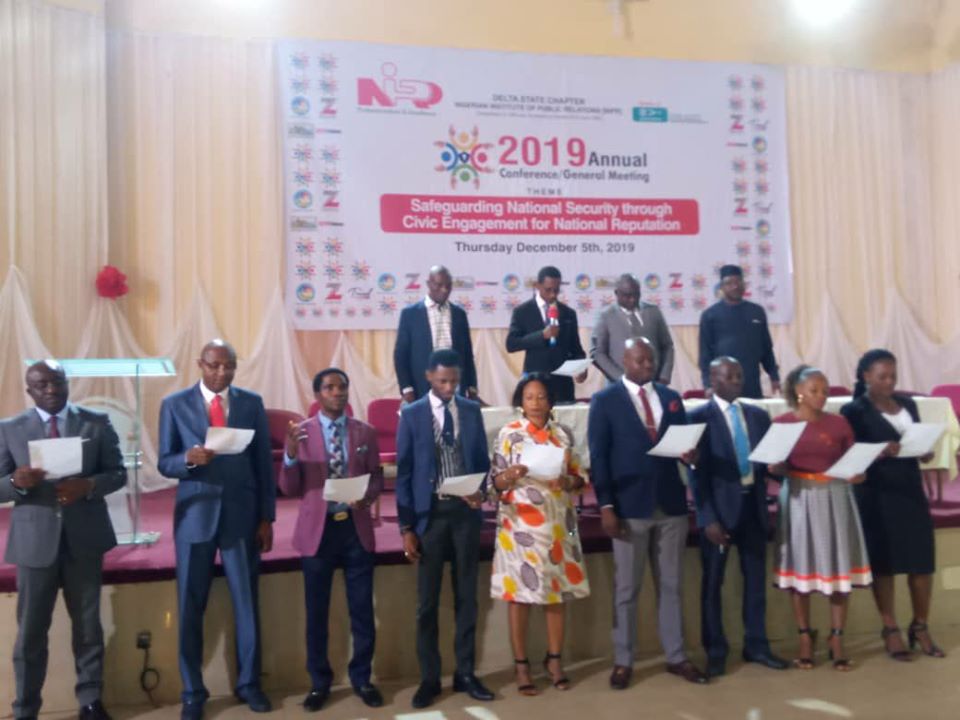 The Nigerian Institute of Public Relations (NIPR), Delta State Chapter has elected a substantive executive led by the Delta State Commissioner for Basic Education, Chief Patrick Ukah as Chapter Chairman to pilot the affairs of the Institute for the next two years.

The election and swearing in of the new executive members was supervised by the Institute’s National President and Chairman of Governing Council, Mallam Mukhtar Siraju and other officials from the national secretariat in Abuja.

Accepting the responsibility to lead the Chapter, Ukah who was the immediate past Interim Chairman pledged to bring professionalism into place, bearing in mind the ethical requirement of the Institute.

He said the Delta State Chapter was well positioned to play a leading role in the Institute in terms of the number of practitioners, civic engagements and desire to sell a state brand that would stand Delta out in the comity of states with high premium for positive image and sound reputation.

The Chapter’s immediate past Scribe and Mr Prolific, Mr Godfrey Osakwe was returned as the Vice Chairman while Mr Ken Bienose was elected as Secretary.

The theme of the Conference Lecture was “Safeguarding National Security Through Civic Engagement for National Reputation”, delivered by the renowned Amb. Joe Keshi.

Other high profile discussants who constituted the panel of discussion were Mr. Yomi Badejo, President of African Public Relations Association (APRA) and Mrs Nkechi Alli-Balogun, a member of the NIPR Governing Council.

Dignitaries and eminently respected personalities that were also prominently present were the Honourable Commissioner of Information, Mr Charles Ehiedu Aniagwu who represented the Governor, the Omu of Anioma, HRM Obi Martha Dunkwu and others too numerous to mention.