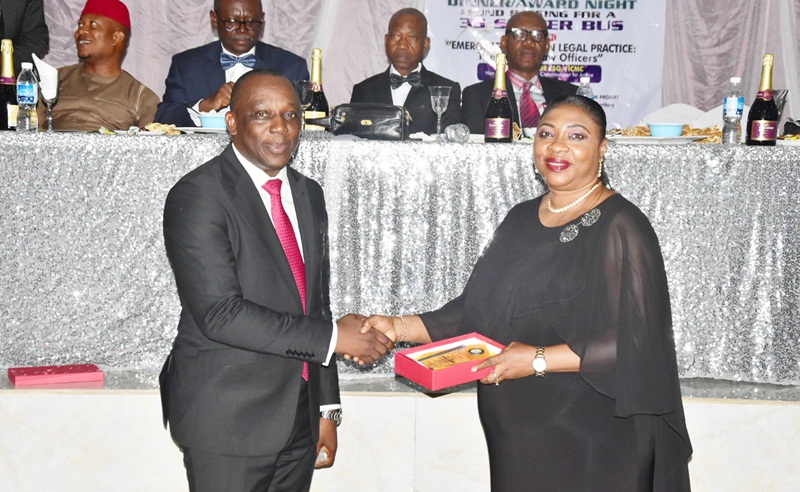 Delta Attorney General and Commissioner for Justice, Mr. Peter Mrakpor has stated that the State Ministry of Justice instituted the annual Attorney Generals’ award to recognize and reward staff that are dedicated, hardworking, diligent and exhibits high level of professionalism and discipline in the discharge of their duties.

The Attorney General made this known on Friday, December 8, 2019 at the grand finale of the maiden edition of the Law Officers’ Association of Nigeria (LOAN) Law Week celebration, held at David’s Event Centre, Asaba where he announced rewards for the best Legal Officer of the year.

Ten Officers of the Ministry were also rewarded for being outstanding in the performance of their official duties.

Mr. Peter Mrakpor made the surprise announcement that elicited jubilation amongst Staff with Barr. Ajuwaghan Orode clinching the most outstanding legal officer of the year.

Also rewarded was a security man, Mr. Peter Mordi who was recognized for his devotion to duties in spite of his age.

Delta Attorney General, Mr. Peter Mrakpor in a Group photograph with Judges, past Attorney Generals ànd other invited guests at the Dinner/Award night organized by the State Chapter of Law Officers Association of Nigeria.

Speaking at the event which was attended by the State Chief Judge, Justice Marshal Umukoro, represented by Justice M.O. Omovie and other High Court Judges including Justice D.C. Maidoh, Justice V.I. Ofesi, Justice M.C. Okoh and some past Delta Attorney Generals, Charles Ajuyah, SAN and Chief A.P.A Ogefere, the Justice Commissioner disclosed that the Attorney Generals’ award would now be an annual event where committed Staff would be appreciated and rewarded.

Mrakpor, commended the organizers of the event and described the theme of the maiden edition of the law week “Emerging Trends In Legal Practice; The Role of Law Officers” as apt and trite as according to him, it has formed the many discuss in the nations jurisprudence.

“As Law Officers, we must position ourselves to survive the peaks and troughs of the profession. Most of these trends will help the law officer become more efficient, productive, and competitive in line with international best practices.” He posited.

Earlier, Delta Chairman of the Law Officers’ Association of Nigeria, Mr. Thomas Anigara, in his welcome address, noted that Law Officers play vital roles in the maintenance of law, peace and order in the State by prosecuting criminal matters in courts as well as defending all civil suits instituted against the State.

He also pointed out that the Law Officers were instrumental to the huge revenue generated by the Ministry to the State and made a plea for more budgetary provisions for the Ministry to enable lawyers discharge their duties more effectively.

While appreciating eminent jurists and other special guests who attended the event including the patron of the Association, Prince Ned Nwoko represented by the Special Assistant to the Governor on Health Monitoring, Dr. Michael Nwoko, Chike Onyemenam SAN, past Attorney Generals and Solicitor-Generals as well as Judges appointed from the Ministry, Thomas Anigara sued for support for the purchase of a 33 seater bus to ease the transportation need of the Association including conveying her members to the annual general conference of the NBA and to other conferences.

The Association also presented awards to the State Governor, Senator Dr. Ifeanyi Okowa for his role in promoting the rule of law in the state as well as to his deputy, Deacon Kingsley Otuaro.

Other awardees include the State Chief Judge, Justice Marshal Umukoro, Prince Ned Nwoko who donated the sum of one million naira for the purchase of the 33 seater bus, all past Attorney Generals of the State as well as the current AG, Mr. Peter Mrakpor who received an award for his role in promoting excellent law practice in the State.

Activities marking the celebration of the Association’s Law Week which was first of its kind, started with a curtail party and followed by a physical fitness road walk, novelty football match between the Female Lawyers and their Male counterparts and a Lecture on “Emerging Trends in Legal Practice; The Role of the Law Officer” delivered by Honourable Justice T.C. Makwe, a retired High Court Judge of the Delta State Judiciary.