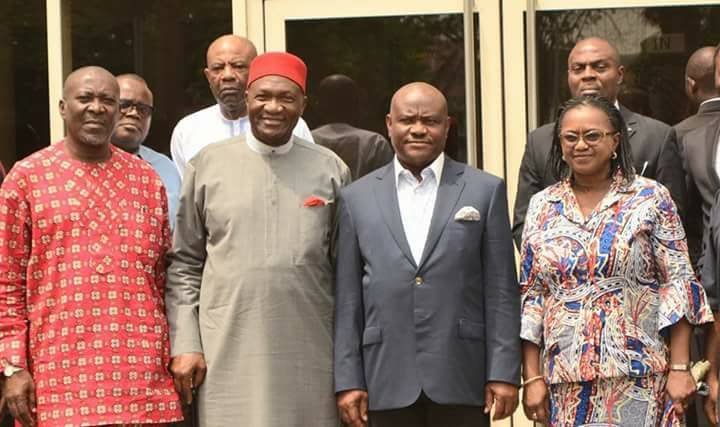 Rivers State Governor, Nyesom Ezenwo Wike has expressed sad feelings over the heightening injustice by the Federal Government which is negatively affecting the unity of the country.

The Governor also berated the Federal Government for engineering insecurity in Rivers State through the use of pliant security agencies to manipulate the security infrastructure of the state.

He spoke on Tuesday at the Government House, Port Harcourt when he granted audience to the President General of Ohaneze Ndigbo Worldwide, Dr John Nwodo and the executives of the association.

In a statement released by his Special Assistant on Electronic Media, Simeon Nwakaudu, Wike said: “The Federal Government engineers insecurity in this state. It is unfortunate that security agencies are sent to plant insecurity in our state.”

The governor said that he will continue to preach and work for the unity of the country, but warned against impunity on the part of agencies of the Federal Government.

He called for dialogue to ensure the strengthening of the country. He said that dialogue will resolve the challenges facing the country.

On the development programmes of his administration, Governor Wike assured that the Rivers State Government encourages investors through easy access to land for business purposes.

Earlier, the President General of Ohaneze Ndigbo, Dr John Nwodo called for the restructuring of the country to give every section a sense of belonging.

Nwodo accused the Buhari administration of deliberately refusing to invest in infrastructure in the Southeast.

The President General of Ohaneze Ndigbo Worldwide condemned the continued persecution of Governor Wike by the Federal Government. He assured the governor that the people are behind him in his travails.

He commended Governor Wike for his achievements in the area of road construction and economic development. He urged him to also invest the development of industrial layouts.

ALSO READ:  Ute-Okpu Elites Commend Governor Okowa Over Approval of 10.85km Road Project
For advert placement, publication of news content, articles, videos or any other news worthy materials on this Website, kindly send mail to asabametro@gmail.com.
Continue Reading
Advertisement
You may also like...