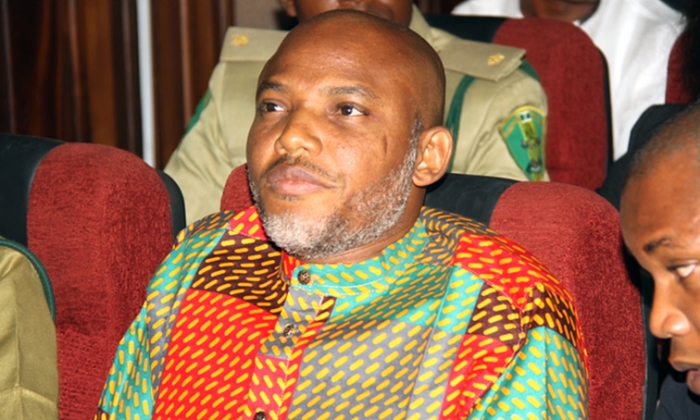 A Federal High Court sitting in Abuja has granted bail to the Leader of the Indigenous People of Biafra (IPOB), Nnamdi Kanu.

The presiding judge, Binta Nyako, gave the order to allow Mr. Kanu attend to his ailing health condition. The bail is the first since the commencement of his trial for alleged treason.

According to the order, Mr. Kanu is to produce three sureties with N100 million each.

He is also expected to not be among a crowd. The judge said Mr. Kanu must never be seen in a crowd of more than 10 people. “No interviews and no rallies,” said Mrs. Nyako.

However, Journalists were barred from covering the ongoing trial of the self-acclaimed leader of the Indigenous People of Biafra.

This is against the earlier judgement by the presiding judge, Justice Binta Nyako, who ruled that the trial should not be secret.

The trial went on without media coverage.

Nnamdi Kanu and three other pro-Biafra agitators are currently standing trial on allegations of treason among others.

Meanwhile, there was mild drama in court as a former minister was prevented from witnessing the today’s ruling.

Ekiti State Governor, Ayodele Fayose, was among those who attended Tuesday’s sitting.

Ayiri should not misinform Deltans, Okowa has created over 17,173 Jobs – Ossai
Shocking: Man murders Daughter and kills Himself on Facebook Live
Advertisement