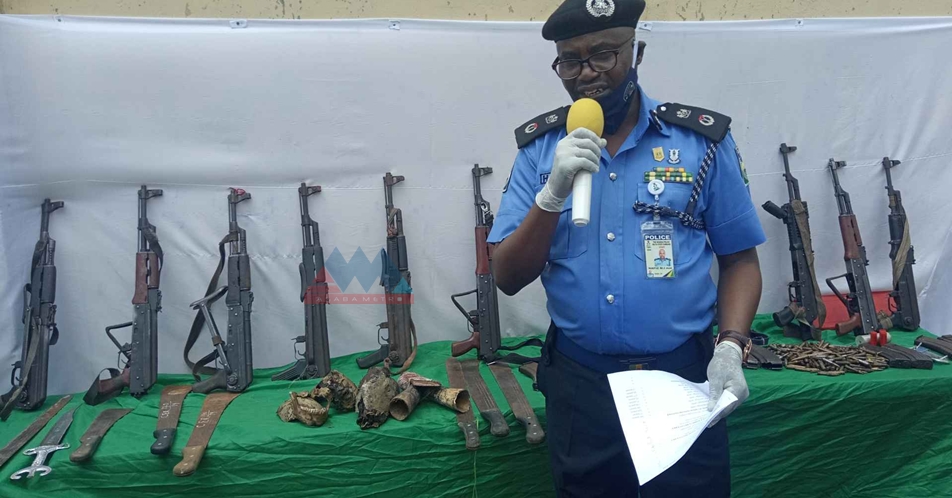 The Nigeria Police Command in Delta has recorded another feat in the fight against crimes and criminality in the State as a total of 182 suspects were paraded to the Public on Wednesday, May 13, 2020.

The parade of the crime suspects at the Police command headquarters in Asaba is the second of such by the Commissioner of Police, CP Hafiz Inuwa since his assumption of duty as the state Police Boss.

Briefing the Press before the tour of the suspects, CP Inuwa commended Deltans for their continued partnership with the Police Command in the fight against crimes and criminality, “indeed, your support to the command within four (4) months of my arrival as Delta State Commissioner of Police has been overwhelming”, he said.

Adding that the collaborative efforts to provide residents of the State with adequate security, protection of lives and property and prevention of breakdown of law and order has led to the arrest of many terrorists/armed robbery suspects, suspected kidnappers, cultists and many other criminals disturbing the peace of the state.

Parading the suspects in batches, the State Police Command had on March 28, 2020, arrested two suspected child traffickers,one Tolulope Bosede (female 45yrs) and Abiola Komolafe (female 20yrs) both of Akure in Ondo State while on transit in a commercial bus along Asaba/Benin Expressway in Okpanam area.

According to Police report of the case, “they were suspected to have sold a newly born male child delivered by one of them, Abiola Komolafe ‘f’ 20yrs to a trafficker in Onitsha and were headed back to their base in Akure when they were arrested by the Police acting on information.

“In the course of investigation and following the confession of Tolulope Bosede ‘f’ that she tricked pregnant Abiola Komolafe ‘f’ from Akure to Onitsha where she successfully gave birth to a baby boy, but she later took the baby from her and sold him to one Mrs Nkaneme Melife (f) 37yrs in Onitsha while she lied to the mother that the baby died some hours after delivery.

“The buyer, Mrs Nkaneme Melife later sold the child to another buyer, one Mrs Ekunno Ifeyinwa (f) 56yrs of Onora family house, Abba Village, Onitsha. Meanwhile, the two buyers have been arrested with one Josephine Unnoha ‘f’ and the stolen child was recovered. Their arrest led to the recovery of another two weeks old male child also suspected to have been stolen by same Mrs Ekunno Ifeyinwa.” The case is under investigation, the report read.

Speaking to journalists, the Mrs Ekunno Ifeyinwa dislosed that she got the baby girl for the sum of N980,000.000 and the boy for N1,300,000.00 from a welfare officer in Anambra. She added that the babies were gotten for her brother based abroad who had been married for years without a child.

Another striking case was the arrest of IPOB members at their various training camps within the metropolis of Asaba, the State capital whose activities were likened to a massive terrorist plan with acquisition of assorted weapons from murdered and maimed Police Officers in the state over the years.

Their arrest according to Police report stated, “the command’s sustained efforts in the investigation of the attacks and snatching of Police rifles and ammunition in the State yielded desired results when some principal suspects with strong link to the proscribed Indigenous People of Biafra (IPOB) were arrested and made confessional statements.

“After a diligent and painstaking investigation, on April 5, 2020, while acting on the confession of the arrested key principal suspects, Police operatives recovered the following arms and ammunition snatched from Policemen from Ugwunwosu Camp of the proscribed IPOB; Ten (10) AK47 rifles, Ten magazines with Two Hundred (200) rounds of AK47 ammunition.

“Also, on April 24, 2020, one of the suspects led Police operatives to the proscribed IPOB training camp at Ibusa where one AK47 riffle with its magazine and 26 rounds of 7.62mm ammunition robbed from Safer Highway Patrol Team along Ogwashi-Kwale road by Obasanjo Farm on January 1, 2020 was recovered from where it was buried in the camp.

“Similarly, on April 29, 2020, two of the suspects led the operatives to Idumogi forest in Okpanam where the following robbed Police arms were recovered from where buried; Two AK47 riffles, One Smoke Gunner, one Smoke Canister, four AK47 magazines, two hundred and twelve (212) 7.62mm AK47 ammunition, one MP3, a set of Allen keys and one hand bag.”

Meanwhile, a total of thirteen (13) Police AK47 riffles with ammunition robbed during attacks on Policemen by suspected IPOB members in the State over the years have been recovered. Investigation is still in progress, the report added.

Speaking to some of the suspects, they admitted being members of IPOB who  volunteered to be part of Biafra Security Service (BSS) and had engaged in the gun snatching in order to beef up their arm cache in their quest for territorial succession.

Another case was the arrest of suspected ritualists and unlawful possession of suspected human bones and used children pads in Udu local government area of the state.

The Police report on the case declared that, “on April 6, 2020, one Stephen Oyibare ‘m’, the vigilante leader o Igbogidi Community in Udu reported at the station that Two (2) suspected ritualists pretending to be of unsound mind were accosted under the DSC Expressway Bridge by Igbogidi.

Upon search, the suspects were found with suspected human bones. Consequent upon the report, the Divisional Patrol Team was deployed to the scene and the vicinity was enveloped with offensive stench of decomposing items.

Further search on both suspects and scene by the Police led to the recovery of nine (9) suspected human bones, fifteen (15) used baby pads, a pair of skating shoes, red-brownish powdered substance wrapped in three black polythene, a sack containing clothing, documents and two voters’ cards belonging to one of the suspects. The suspects gave their names as Yakubu Bala Dagann ‘m’ 33yrs of Shamshitta Street, Takum, Taraba STate and Emmanuel Obughor ‘m’ 30yrs from Ahoda East LGA of Rivers State.

Both were very coherent in their speech when interviewed, they neither appear to be sick nor able to justify why they were residing under the bridge or their mission in the area. Meanwhile, the recovered bones are still subject to laboratory confirmation as to ascertain their origins. The suspects were arrested and are in custody while the case is under investigation.

Other suspects arrested by the command between 11th February, 2020 to 13th May, 2020 include; 53 suspected armed robbers, 23 suspected kidnappers, 66 suspected cultists, 8 murder suspects, 28 protesters at Abraka Market Asaba and 4 suspected thieves.