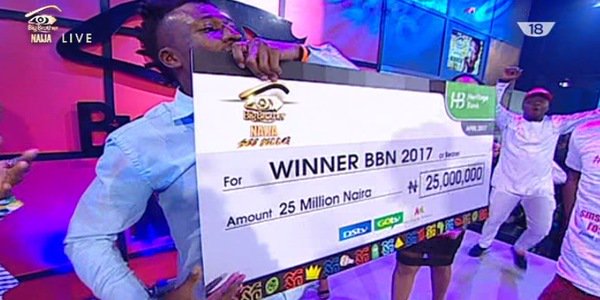 As the winner of the 2017 edition of the reality TV show, Housemate Efe went home with a cash prize of N25 million and a Kia Sorento SUV.

The Warri-born up and coming rap artist beat Bisola, who became the 1st runner up with 18.54 % of the vote at the grand finale.

Efe who had never failed to stress that he was real was nominated for eviction in January and March but survived.

The economics graduate had stressed that his humility, simplicity and being real would make him win the hearts of viewers.

His emergence came after Marvis, Debie-Rise and Tboss were evicted during the grand finale.

Efe who was Marvis’ love interest in the house said in spite of the attraction between them, he was careful not to do anything that could jeopardise his stay in the house.

He was Head of House once and had been very active in most games and tasks in the Big Brother House.

He had actively participated in the ONE Campaign song, the video shoot, drama and others. He had always been delight of the party during the usual Saturday night party in the house.

Efe, during Davido’s visit said if he won the grand prize, he would use it to push his music career to the next level.

He received a rousing and warm support from Deltans and Nigerians.