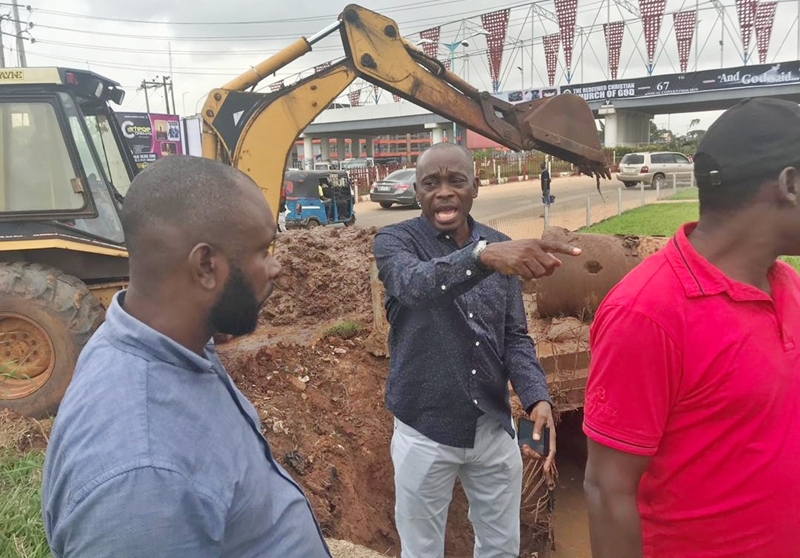 The Delta State Government has promised sustained measures in addressing the perennial flooding in Asaba and its environs, stressing that it is not relenting on efforts to seeking permanent solution to the problem.

The Director-General, Special Programs to the State Governor, Chief Frank Omare who gave the assurance on Thursday, July 25, 2019 while supervising the desilting of drains in major roads and streets in Asaba, said the ongoing storm water project is a master stroke in that regards.

Chief Omare noted that the commitment of the Governor Ifeanyi Okowa to ensuring free flow of water whenever it rains was achievable, expressing optimism that the problem will soon be a thing of the past.

He disclosed that the ongoing massive desilting, including clearing of major drains alone the ever Okpanam road, High Court road and Inter Bua roundabout among others had helped to ameliorate the problem of flooding in the areas.

Omare disclosed that heavy duty equipment, including Pay-loaders, Excavators and Tractors as well as over one hundred and fifty manual laborers were engaged since one week running for the desilting program.

The Director-General also disclosed the arrangement for over a dozen 911 Tippers to immediately evacuate the debris from the drains.

Chief Omare who said the problem was sometimes overwhelming, maintained that providing palliative measures was a task that can not be undermined.

He frowned at the attitude of residence towards refuge disposals and management and warned against further blockage of the drainage channels.

Chief Frank Omare said a task force is likely to be set up as part of government efforts to ensuring sanity in the environment, reminding the people that monies being used by government to clear debris could have been channeled to other areas of development.

While expressing discomfort over the level of rain falls this year, Omare however assured that the state government would continue to open up the channels for water to flow freely.

He said the volume of waters coming from Okpanam axis of the capital territory whenever it rains was enormous, expressing optimism that the problem will be resolved once the storm water project was completed.