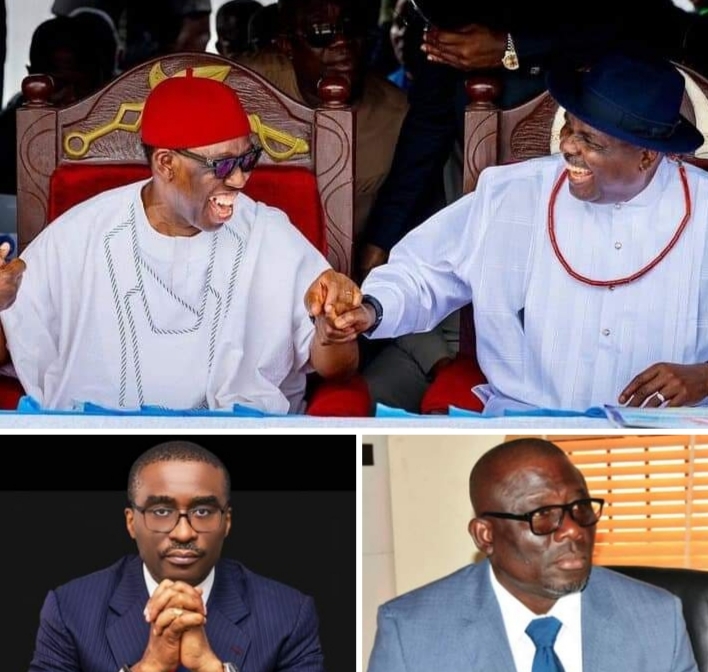 While the various spurious claims he made in the interview are undeserving of any attention, we are concerned about the danger to the future of Delta State as contained in his threat to force Governor Ifeanyi Okowa and Chief James Ibori to lower the bar of Delta Governorship to enable him and his co-travellers foist an Agbero system on Deltans.

Knowing that Governor Okowa has withdrawn his earlier falsely touted endorsement for Oborevwori, as was well reported, seeing that he is unsellable as Deltans were indeed terrified at the mention of his name and have roundly rejected him for his lack of capacity and candour, Loyibo revealed that he and his desperate street gang mobilised during the Easter to pressure the Governor to reconsider him.

In his words: “We told him clearly that we stand on Sheriff Oborevwori and we are not shifting…If he (Okowa) goes against us, we are going to resist him.”

This clearly indicates that, as being falsely propagated, Oborevwori is not the choice of Governor Okowa but of a few persons on whom Deltans know never to entrust the governance and future of their state.

He described the character and composition of his gang in the last paragraph of the interview when he said: “Let us even look at it, are you saying that because I (Mike Loyibo) was in motor park venture before, I should not be governor?”

For a quick answer, no, Deltans would not want a Governor from the motor park. Deltans want a soundly educated, professionally skilled, roundly experienced and well exposed person as their Governor.

By the way, what is “motor park venture” if not a mere phrase to repackage what Deltans know well to be “Agbero” business?

It describes those menacing rent collectors who harrass and extort undue titles from innocent and hard working transport owners and drivers which increases transportation fares, makes life difficult for travellers and businesses and divert state internal revenue into their pockets.

It also describes those who visit companies with intimidation and violence to collect “Deve”, a criminal street culture that has made investors run away from the state with the attendant destruction of employment opportunities for our people, especially in the South and Central districts where Loyibo and his gang operate.

No matter how they try to represent this vicious culture as being grassroot, Deltans know that it simply means “jaguda” and they would not have a gang of jagudas impose a Governor on them nor have one of the jagudas as their Governor.

As we can see, not only have our neighbours in Edo and Anambra elected hybrid economic managers as their Governors, Prof Charles Soludo has embarked on driving motor park “agberos” from his state to provide better security for his people and a saner environment for both local and foreign investors to come in.

Loyibo’s attempt to discountenance David Edevbie’s sounder qualifications, experience and capacity also falls flat on its face because Deltans already appreciate Edevbie’s qualities and widely accept him as the best prepared and organised person for the job.

Loyibo’s attempt to suggest that Edevbie is not abreast with the yearnings of the people also fails. In case he suffers memory loss, we remind him that the DESOPADEC money which his so called Stakeholders, especially the likes of Askia Ogieh and Michael Diden, Managing Director and Chairman, respectively, are now controlling and suspected to be using to fund the already collapsing adventure with Oborevwori, was fought for by David Edevbie who as the State Commissioner of Finance, led the commissioners of the other oil producing states to fight for the actualisation of the payment of 13% Derivation which is used to fund the agency. The sad part is that rather than applying the money for the development of the oil communities which it is meant for, they are not using it to fund the political pursuits of their gang members with Diden running for Delta South Senate, Askia for Isoko House of Reps and John Nani, the Director of Admin and Finance, also running for Delta Central Senate.

Loyibo also needs to be reminded that, in addition to recommending the creation of the Ministry of Niger Delta Affairs to provide added funding platform for the development of the Niger Delta, it was David Edevbie who conceptualised and enabled the proclamation and establishment of the Presidential Amnesty Programme by which the government secured peace with militant camp commanders in the Niger Delta for normal life to return to our creeks, while the militant youths were sponsored for various higher education and professional skills acquisition in Nigeria and overseas to improve their employability, economic independence and human dignity.

Perhaps, he should also be reminded that it was Edevbie’s expertise in economic engineering to raise Delta revenue from a paltry N6b in 1999 to over N60b by 2003 that enabled the state under James Ibori to construct the Bomadi Bridge to connect the riverine communities of Western Ijaw with their brothers on the other side of Forcados River. Loyibo is now able to drive his cars to intimidate our Tuomo people only because Edevbie was able to help the state raise the needed funding for the construction of the link bridge.

These initiatives do not come from the motor park nor from those who live by molesting and driving companies away through their collection of “deve” or harrassing transporters and local businesses in the name of street credibility. They come from sound socio-economic development expertise with deep understanding of the problems and yearnings of their people and are well equipped to provide intelligent, effective and sustainable development solutions as Edevbie has done and will continue to do as he has espoused in his unbeatable modernisation agenda for Delta State.

And, talking about having home base, Loyibo should see that just like Governor Ifeanyi Okowa enjoyed the endorsement of Anioma Congress, the topmost convergence of Anioma nation, Edevbie enjoys the support of his home Urhobo Progress Union which is also the equivalent of Anioma Congress and the Ijaw National Council, the highest rallying point of the Izon nation.

On the other hand, Loyibo and his gang of self acclaimed stakeholders from Delta South and Central whom he says are backing Oborevwori are well known to be merely a band of political hustlers who only thrive by deceiving, intimidating the people and businesses, grabbing the assets of helpless citizens and corrupting the government and political system to sustain their nauseating bloat.

Deltans are saying such nuisances cannot obtain in choosing their Governor.