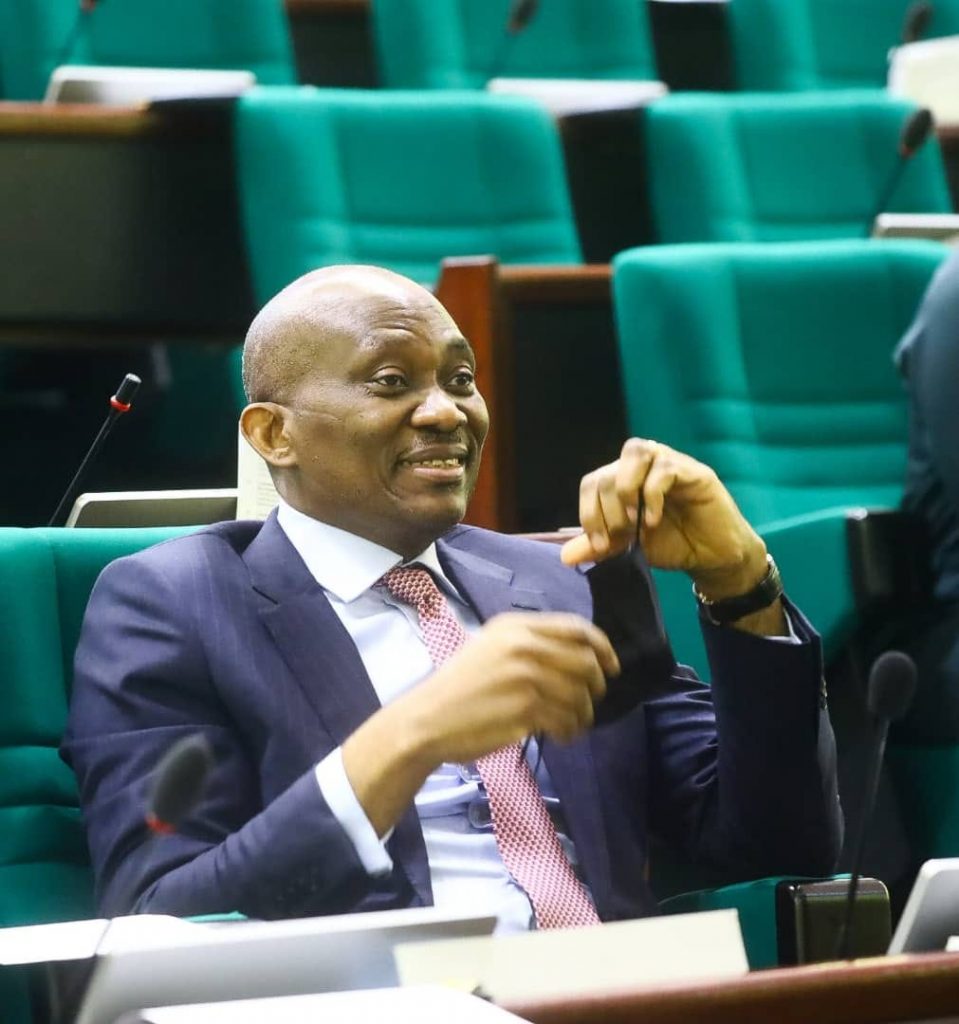 Rt. Hon. Ndudi Godwin Elumelu, a cosmopolitan politician with a heart for service, had great plans for the people of Aniocha/Oshimili Federal Constituency of Delta State when, in the 2019 general elections, he sought for their mandate, to represent them in the 9th National Assembly of the House of Representative.

He was overwhelmingly elected by the people in that election and, on Tuesday June 11, 2019, he was inaugurated as their Representative, in the Green Chamber of the National Assembly in Abuja.

Elumelu, with this clear direction and a great sense of mission, did not keep the people waiting for ages before he started demonstrating responsibility and obligation to them, in line with the social contract he entered with his Aniocha/Oshimili Federal Constituents.

His passion and commitment to the duty in the 9th National Assembly can best be described as three years of exceptional, robust and excellent representation of the people. It is incontrovertible that Rt. Hon. Elumelu’s representation in the House of Representatives has brought unprecedented dividends of democracy in the annals of the Federal Constituency.

Rt. Hon. Ndudi Elumelu, a major voice of the Nigeria people as the Minority leader of the House of Representatives, has strived with boundless passion, to attract series of very significant infrastructural constituency projects across the Federal Constituency, while at the same time, engaging in massive empowering of his constituents in so many ways.

Some of His constituency projects include;

1. Provision of 1,220 stands of solar street lights distributed across communities in the four Local Government Areas in Aniocha/Oshimili Federal Constituency.

2. Construction of new staff quarters and clinic for the Department of State Services (DSS) Asaba.

3. Renovation of DSS Office and Premises in Issele Uku.

4. Commencement of the Construction of the Onicha-uku-Idumuje-Unor Road.

23. Construction of Obi Palaces at Obomkpa.

24. Construction of Obi Palace at Idumuje-Unor.

33. on-going construction of the Oko and Asaba Jetty for 8 numbers of 20 passenger boats respectively.

Some of his human capital programmes leading to empowerment of over 3,400 beneficiaries include;

1. Direct employment of over 150 Personal Assistants (PAs) on Youth and Women Matters.

2. Distribution of 188 tricycles, 239 motorcycles, 322 electricity generator sets, and 301 deep freezers, 71 sewing machines worth over N760 million to 1,121 beneficiaries drawn from various wards across the four Local Government Areas in the Federal Constituency. This is in addition to empowering 300 artisans with Cash grants of N100, 000 each to support their various vocations.

3. Facilitation of job placements for over 40 beneficiaries in major Federal Government Ministries, Agencies and Departments.

9. Facilitated a Ministry of Humanitarian and Poverty alleviation scheme for 30 beneficiaries.

10. Sponsored a two-day capacity training programme for 200 youths and women in cassava and rice production, after which starter packs were given to them at the end of the training.

11. Sponsored a four-day capacity training programme in Abuja, for newly elected and inaugurated Chairmen and their Vice, alongside the newly elected 80 councilors in Aniocha/Oshimili Federal Constituency.

15. Presentation of Starter Packs to Young farmers under the aegis of Onicha-Uku Youth Farmers Association which was in cash to enable the young Farmers commence farming activities in 2022 current farming season, having been trained on general farming techniques facilitated by him.

There is no week in session that he does not present a motion or bill that has a direct impact on the wellbeing and development of the people of Aniocha/Oshimili in particular and Nigerians at large. This is apart from bills and motions co-sponsored with other members.

Some of such bills and motions include:

2. Background Information on a Bill for An Act to establish Federal University Of Technology, Asaba, Delta State for the purpose of providing quality technical education and for related matters.

3. The bill seeks to help the Nigerian Government to coordinate responses to infectious disease outbreaks such as Ebola, Lassa fever, coronavirus.

4. Background Information of a Bill for an act to provide for the registration and regulations of lobbyists in legislative Houses and for related matters.

5. Motion on the need to investigate the Niger Delta Development Commission (NDDC) for the award of contract for the emergency procurement of specialized medical personal protective equipment (PPE) for health workers and provision of community-based sensitization campaign against the spread of Covid-19 and other communicable diseases in the nine states of the Niger Delta Region.

7. Motion on the Restoration of Aniocha South Constituency 1.

8. Motion on the Review of The Division of States Of The Federation Into Federal Constituencies.

9. Motion on the deplorable nature of Benin-Warri and Benin-Asaba-Onitsha highways.

10. Motion on the Need for Urgent Investigation of Negotiations with Bandits, Violent Herdsmen and Terrorists and its effects on rising insecurity in the nation.

11. Motion on the Need to investigate the illegal withdrawals from the Nigerian Liquefied Natural gas (NLNG) dividends account by the management of the Nigerian National Petroleum Corporation and the non-financial and financial project and programme audit of the office of the Senior Special Assistant to The President on Sustainable Development Goals (SDG) by the Auditor General of Federation.

12. Motion on the need for the investigation of the sales of crude oil and diesel seized from illegal oil bunkers by security agencies.

13. Motion on the need for the investigation of $800 million stolen crude oil.

14. Motion on the urgent need to halt appropriation of 2.5 million Pounds belonging to Delta State by the Federal Government.

15. Motion on the need to provide equipment for the Federal Medical Centre (FMC) Asaba Annex.

16. Motion on the need for Benin Electricity Distribution Company (BEDC) to urgently restore electricity to Enuani clan in Delta state.

17. Motion on the rising cases of violence, incessant rape and killing of our women folks: A call for urgent intervention.

18. Motion on the need for the Federal Government of Nigeria to place a ban on the entry of herdsmen from other African countries into Nigeria.

19. Motion on the need for a call to investigate Sheik Isa Ali Ibrahim Pantami Minister of Communications and Digital Economy’s link to terrorist groups- A potential threat to National security.

21. Motion on the need for the Federal Government to grant operational rights to Bayelsa Airport

22. Motion on the invasion of the Federal High Court premises Abuja by men of the Department of State Services (D.S.S.)

23. Motion of urgent need for the Federal Government to interface with the managements of electricity companies and the National Union of Electricity Employees (NUEE) to avoid impending electricity blackout.

24. Motion on the urgent need for the Federal Government to rescind their decision on not allowing the Standard Organization of Nigeria (SON) to be stationed at all ports and Borders as part of their strategy to effectively check the influx of substandard goods into the country.

25. Motion on the need for the Federal Government to urgently intervene in the security breaches along Lokoja/Enugu and Awka/ Enugu routes.

26. Motion on the need to investigate the purported voluntary resignation of over 365 soldiers from the Nigerian Army.

27. Motion on the need to investigate the award of contract for the rehabilitation of the railway tract network eastern line contract – ( KM 803 to Km 1443 to Maiduguri ) to Messrs Lingo Nigeria Limited in Association with streaky husty and partners limited of Czech Republic.

28. Motion on the need to investigate the alleged sleaze, misappropriation and non-profitability of the Nigeria Communication Satellite Company (NIGCOMSAT) limited.

29. Motion on the alleged inflation of the Ajaokuta-Kaduna-Kano (AKK) Gas Pipeline Project by the NNPC to the tune of $1.527 Billion. A call for investigation

30. Motion on the need for the Nigerian Communication Commission (NCC) to give Nigerians reasonable time to submit their National Identification Number (NIN) for SIM registration.

32. Motion on the need to investigate an SOS call that a Chinese company in Edo state of Nigeria has continued to detain its Nigerian workers since that lockdown, in flagrant abuse of the Federal Government COVID 19 regulations.

33. Motion on the need to investigate the alleged sleaze and misappropriation of N100 Billion at the Northeast Development Commission.

34. Motion on the Allegations of corruption, incompetence and abuse of office against the Director General of the National Agency for the Prohibition of Trafficking in Persons (NAPTIP).

35. Motion on the incessant malpractices associated with diplomatic posting in the Ministry of Foreign Affairs, a call for investigation.

36. Motion on the incessant abuse and disregard of the 2021 Appropriation Act by Ministries, Departments and Agencies (MDAs) of government.

37. Motion on the Attempts to tarnish the image and hard earned reputation of Dr. Akinwumi Adesina, President of African Development Bank (AFDB) on trumped-up allegation.

38. Motion on a call on the Nigeria army to release Lance Corporal Martins Idakpein from arrest on the basis of his expressed opinion.

39. Motion In support for Dr. Ngozi Okonjo-Iweala as the Director General of the World Trade Organization (WTO).

40. Motion on the immediate reversal of the suspension placed on Channels Television.

41. Motion on the need to intervene In the Diplomatic row between Nigeria and the United Arab Emirates.

42. Motion on a case of missing journalist, need to investigate circumstances surrounding the disappearance.

43. Motion on the need to intervene in the suspension of issuance of Visitor’s Visa to Nigerians by the United Kingdom.

44. Motion on the urgent need to interface with the authorities on the maltreatment and humiliation of Nigerian travellers coming from the United States of America and transiting at the Gnassingbe Eyadema International Airport in Togo.

45. Matter of urgent importance on petrol scarcity across the nation.

46. Motion on the need to investigate the monumental fraud and illegalities going on at the Federal Road Maintenance Agency Of Nigeria (FERMA).

47. Motion on the need to investigate the Ibadan-Lagos train fuel saga.

In all, it has been a story of proactive and sincere leadership, an uncommon achievement in justifying the mandate of the people of Aniocha/Oshimili Federal Constituency in the House of Representatives.

Rt. Hon. Ndudi Godwin Elumelu, is indeed, a Man of Destiny with great heart and passion for the people. No wonder the enthusiasm and readiness of his people to return him to continue with his charismatic and proactive representation in the 10th National Assembly.

To God we give all the Glory.

THE ARENA: Okowa And The Vice Presidency
THE ARENA: That Attack On Okowa From The Immoral Pen Of The Viper’s Breed
Advertisement