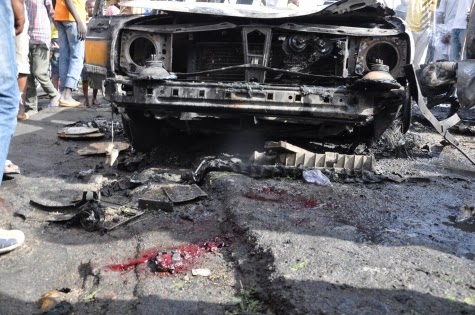 Three female suicide bombers were shot dead by security agents after they tried to gain entry into Maiduguri early on Friday, the Borno Police Command said.

In a statement, Mr Victor Isuku, the spokesman of the command, said that the bombers wore Improved Explosive Devices (IEDs) on their bodies.

“This morning at about 05:30hrs , three female suicide bombers with IED strapped to their bodies were sighted by military patrol team in Umarari village along Maiduguri/Damboa road near Mulai. They were moving towards Maiduguri,” he said.

Isuku added: “They were promptly gunned down and the IED on two of them exploded killing all three ”.

He said that the police bomb disposal unit was mobilized to the scene immediately.

“The unexploded IED on the third was rendered safe and detonated by Police Bomb Disposal Unit who promptly mobilized to the scene,” Isuku said