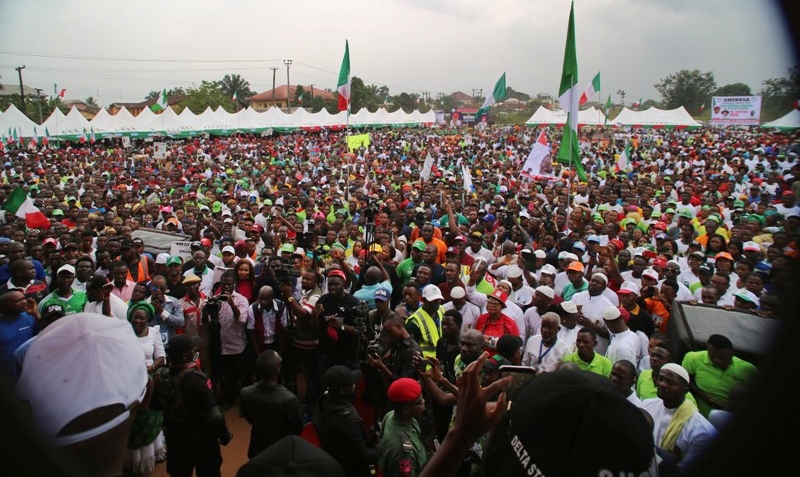 … As Okowa Says More Projects To Be Commissioned Before Election

Thousands of Deltans on Tuesday, January 29, 2019 defied heavy down-pour to attend the campaign rally of the Peoples Democratic Party (PDP) in Ughelli South with excited Governor Ifeanyi Okowa expressing joy that Deltans are appreciating the development projects of his administration.

The heaven was opened at Otu-Jeremi, Ughelli South local government area where thousands of Deltans sang and danced in the rain.

Governor Okowa at the rallies which also took place at Obiaruku, and Isiokolo, in Ukwuani, and Ethiope East local government areas of Delta State, expressed joy that Deltans appreciate the projects and programmes executed by his administration.

“I am happy that the projects and programmes we have executed have met the yearnings and aspiration of Deltans which has led to these excited crowd. Good people of Delta State, in the next four years, we will construct more roads,” he said.

The governor continued, “before the elections, we shall commission some projects because, even with the rain, you are happy and grateful to God for His goodness to us as a people.”

Governor Okowa who was accompanied to the rallies by his wife, Dame Edith stated, “when we came on board, the country was in financial crises, despite that, we applied experience in governance to do what we did and our people are happy; in the next four years, we shall triple the number of widows that we are assisting, more youths will benefit from the empowerment and wealth creation programmes because, things are better.”

The campaign rally at Isiokolo was spectacular as several members of the opposition political party, the All Progressive Congress (APC) decamped to the PDP while Mrs Odiri Benjamin of Ward 10 Unit 7, Ekaka Village Kokori delivered a baby girl at the campaign ground.

While congratulating the parents of the baby girl that was delivered at the rally venue, Governor Okowa gave them the sum of N2 million to open an account in the child’s name; he also, expressed joy that the projects executed by his administration had attracted members of the opposition political parties to join the PDP.

The governor at Obiaruku observed that massive crowd that came out for the rally was expected as the party has always won in the area and the votes should increase bearing in mind that their son, a Delta norther is seeking re-election as Governor.

He commended Deltans for their peaceful dispositions and called for continuous partnership with his administration which he said will transform the state.

The governor who urged the people to vote for all the candidates of the PDP from Presidency to House of Assembly level, urged them to protect their votes.

They all observed that Governor Okowa has worked hard to transform Delta State and deserves to complete two terms in line with rotation principles of the PDP in the state.

While assuring the governor of the votes of Deltans, they listed the achievements of the governor, stating that all the candidates of the PDP will be voted for.